By Karen Tapia, Philip Bellomo on November 20, 1981 in Football, Sports 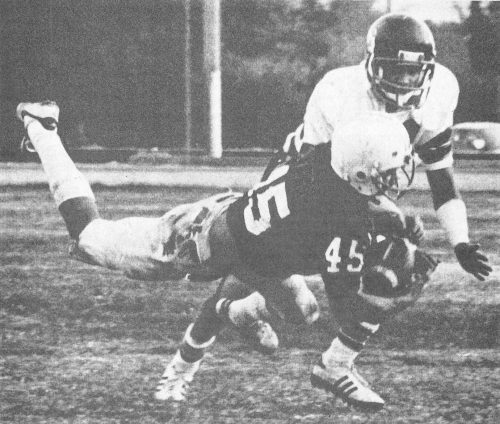 SUPERB! – Fred Gomeztrejo makes a diving catch in the waning moments of last Saturday’s Leopard foot­ ball game against Pomona-Pitzer. The catch kept alive one last attempt to tie the game, but the Sagehens held back the Leos for a 17-10 win. The Leos finished the season 2-7 overall and 1-4 in the SCIAC. / photo by Karen Tapia

Going into last Saturday’s game against La Verne, the Pomona-Pitzer Sagehens were rated the worst team in the country by the Los Angeles Times. That’s right, the absolute worst. On the top of Steve Harvey’s “Bottom Ten” list. In fact, the Leo-Sagehen match up was tabbed as “the crummiest game of the week,” by the Times.

Well, for the Leos, things were really crummy as they dropped a 17-10 decision in the final two minutes.

“This just makes things a little easier to deal with,” said Mike Steinhour, Sagehen head coach, in reference to his team’s win. “Don’t forget we had lost 18 straight before today’s victory.”

And what about being ranked the worst in the country?

“I think, if anything, it gave us more incentive,” said the head men­tor. “The only people who were real­ly upset were some of the alumni.”

Those same alumni probably grew hostile after Saturday’s first play from scrimmage. An 84-yard Greg Hopkins to Rick Romeo touch­down pass put the ‘Hens on the short end, 7-0, not even 25 seconds in to the contest.

The Leos then quickly recovered a fumble by Pomona quarterback An­thony Kandel two minutes later. After Bill Szitkar was ticketed for of­fensive pass interference, La Verne turned to Joaquin Zendejas. All the junior out of Chino did was boot a 55-yarder to put the Leos up 10-0.

That really set the scene. Not even six minutes were gone and the Leo fans were taking bets on whether La Verne could top Clem­son’s 82 points versus Wake Forest two weeks earlier. This looked to be a “cake-walk.”

ULV dominated the ball game de­fensively. The only thing the Pomona offense did in the first half was run on and off the field after three plays. At times it appeared the Pomona offensive line was col­orblind – not knowing what color jersey to block. Leo Defensive End Scott Bolsta had seven sacks alone. But as the first half  wore on, the La Verne offense became sluggish. The Leos could not even hit paydirt when they had a third-down-and­ goal situation from the two-yard line.

“That seemed to be the turning point tor us,” said La Verne Linebacker Dan Olivera.

“To get in the locker room down only 10 points was a moral victory by itself,” said Steinhour.

It must have been as the Sage­hens continued to battle. Pomona’s Derek Watanabe picked off Hopkins just outside the La Verne 31-yard line. Naturally, Pomona went nowhere against the Leo defense, giving rise to a 45-yard field goal at­ tempt by Tom Owens. As Owens’ kick fell through the uprights, one could feel the momentum taking a turn. Pomona was flying as high as a kite. After all, it was still in conten­tion, and the game was already in the third quarter.

Pomona waited until the fourth quarter to really give La Verne a scare.

After back-up quarterback Bob Daniels hit his favorite target Tom­my Moore twice, the Leos were called for facemasking, moving the ball to the La Verne 41. Then, for the only time in the contest, the Leos’ defense broke down. Daniels’ hit Ken Anderson on a screen play which went for 29 yards. Five plays later, Daniels snuck in from a yard out.

The extra point floated over like a dying quail, but still was good, tying the game, 10-10.

“I put Gary (Koustik) in because we were simply not moving the ball,” commented Ortmayer after­ward. “It’s just a play you’d like to forget, but can’t.”

La Verne made things close in the waning moments. Hopkins, who was reinserted, hit Romeo twice col­lecting 24 yards. He then threw a ball on the Sagehen 16. However, the Leos could go no further, coming up short on the final four plays. “When that interference call materialized, I felt a dark cloud come over the field. I thought we were in for a tie,” said Steinhour.

All in all, this was a game the Leos should have never lost. Even with a sporadic offensive attack, the La Verne defense allowed only 51 total yards. Not 151 or 251, but 51 lonely yards.

“It’s pretty wacky when a team gets only 51 yards and still scores 17 points,” said Ortmayer. “We were downright bad today, no question about it.”

So it is now the Leos that must be considered for that top spot on the “Bottom Ten.” And even if North­western University, losers of over 30 straight, edges them out at season’s end. Just think; ULV was compared to a Big 10 entity.