By Larry Maestas, Steve Johnson on November 20, 1981 in Football, Sports 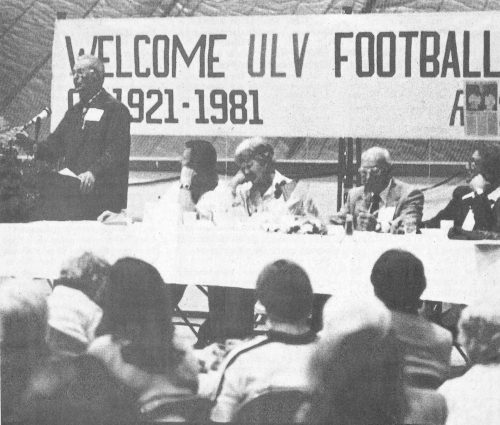 They came from all walks of life and six decades. A common thread tied their lives together-football at the University of La Verne.

Last weekend, the University took a look back at a rich 60-year heritage of La Verne football with a buffet banquet and speakers from every era since 1921. The entire mood was a happy, celebration type evening,

“There is not an institution in the nation that can experience what we are experiencing tonight,” said Roland Ortmayer, ULV head football coach for the past 34 years.

Ortmayer spoke of the opportuni­ty La Verne football participants past and present, had to meet with each other and relate stories. Each speaker had a different story to tell when offering his team’s era in the La Verne football time line.

The night was emceed by Vernon “Red” Weybright, class of ’31. Weybright introduced each speaker, giving him a time limit. If a speaker exceeded the allowed time, a bell would go off.

The Rev. Charles Rose (’55) kicked the evening off with the invocation. La Verne’s first football captain (’25) and co-chairperson of the 60 years of football committee Bert Betts was the first speaker of the night. Dick Hepner (’53) was the other chairper­son of the event.

Remembrances of the past domi­nated the night. John Landis (’39) recalled Coach Paul Hertz’ favorite quote, ” Remember fellas, if you can’t kick the ball, kick someone on the other side.” La Verne even had one of those famous “run-the­-wrong-way-plays” as told by Lan­dis.

The speakers were all interested in relating a little story about their eras, whether it was with a joke or statement. But the consensus of all who spoke was to show or tell of their love and relationship with La Verne College.

As Don Hudson (’53) put it, “La Verne has been one of the greatest influences of my entire life.” Mike Clifton, (’69), added to that, “La Verne has had a life-long impression on my life as it has for most of you.”

Weybright then introduced Coach Ortmayer, saying that with Ortmayer as head coach La Verne had ac­complished a lot of “firsts.”

Ortmayer received a standing ova­tion when he was through speaking. Ortmayer spoke of football over the years and related stories in his special tradition where everyone listened and cared.

Weybright commented that “La Verne College has quite a combina­tion,” speaking of Ortmayer and his wife Cornelia (Corni). Or as Rex Huigens, 1981 assistant coach described her, “Mom of La Verne athletics and football players.”

Ortmayer mentioned that “the longer we stay here; (he and his wife), the more we get in debt (to the institution).” He said that he owes the college for all his years at ULV. In contrast, Huigens said, while making a special presentation, “The Ortmayers have over-paid their debt to the college.”

Corni was then presented with a gift– a diamond necklace. Huigens went on and related a story that hap­pened recently.

“Corni had been saving up for a new stove and oven. When she had just enough money, the archery equipment at the school was stolen. So Ort used that money to replace the stolen equipment. So, Corni to you and Ort, this is only a small way of saying thank you from all of  us; we have an additional gift.”

At that time, a large gift was wheeled from behind a blockade. Corni then unwrapped what proved to be a new microwave stove and oven with an overhead range.