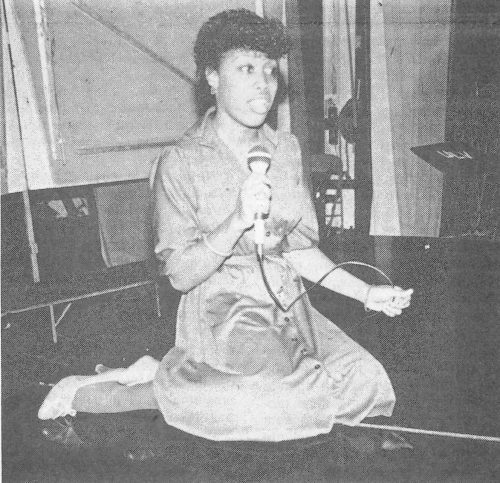 A LADY OF PERSUASION – Renee Sattiewhite, a junior majoring in televi­sion and music, gets a charge out of her various activities in La Verne, as she has since those early years in high school. She takes charge of productions and presents them without visible flaws. Sattiewhite has successfully co­ sponsored a play and a musical, accomplishments which many would find enviable. / photo by Karen Tapia

“La Verne is what you make it, and I’m learning to make it a hell of a lot better for myself,” said Renee Sattiewhite, a junior at the Universi­ty of La Verne.

Sattiewhite is always striving to clear the next hurdle. She has been doing just that since her freshman year.

“I heard the choir perform, and that’s how I found out about the University. I was pretty excited about it  because they even let me come up and sing with them,” com­mented Sattiewhite, who is working toward a double major in Television and Music.

The idea of producing the play, For Colored Girls Who Have Con­sidered Suicide When the Rainbow is Enuf, came about in a rather unusual way.

“Renee and I were just sitting around one day, and we thought that La Verne really needed some­thing special. So we decided to put on a play,” said Madeline Savoy, co­ producer of the production.

Colored Girls, one of the highlights of last spring was well received by both students and faculty. Debbie and Reed Gratz were very helpful, in the production, according to Sattiewhite, and the use of the auditorium was available to the two producers at any time.

“I’ve seen a couple other produc­tions of Colored Girls, and La Verne’s was by far one of the best. It was beautifully done,” said June Campbell, senior at ULV.

After her spring production, Sat­tiewhite was determined to get under way with another project. First to come to mind was a musical such as The Wiz, After thinking about it at length, she decided to do a musical later on for her senior pro­ject.

The fall presentation Octoberfest, which was held Oct. 29, was another tremendous success for Sattie­white. In addition to producing and directing the Octoberfest, she had her own number in the production.

“I had lots of help from the Gratzs, from all the participants and Mike Welch, who was very under­standing when I needed time off from work,” commented Sat­tiewhite, who is a student receptionist in the Financial Aid Office.

What was she thinking a week before the production was to take place?

“I’m too scared to perceive anything so I try not to anticipate the outcome. I’m really glad the Oc­toberfest was received as well as it was; it shows La Verne that I mean business.”

Future plans for Sattiewhite in­clude becoming a television newscaster, and someday she would very much like to produce her own records.