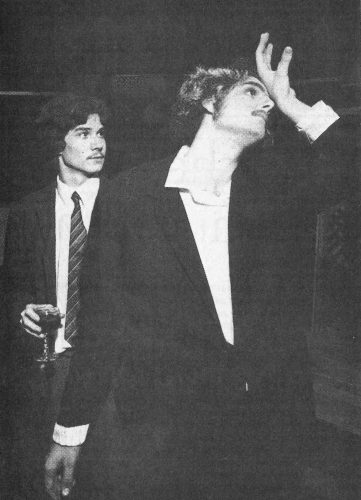 LIKE FATHER, LIKE SON – The latest Theater Department offering, Romeo and Jeannette, featured Garrett Keller and Robert Townsend as a father and son duo. The father Is a worthless human who refuses to see things as they really are, and Lucius, his son, Is a sardonic chap who once got shafted by love. Both Keller and Townsend gave remarkably skilled portrayals, despite their unlikeable on-stage personae. The remainder of the cast fared equally as well. / photo by Christy Tyler

Romeo and Jeannette, Dailey Theatre’s latest offering that was presented Dec. 1-5, is not the story of two sisters who take their sibling rivalry a step beyond to vie for the affections of the same gentleman. It is, however, the tragic tale of the complicated and disconcerting rela­tionship of a namby-pamby mama’s boy and a fickle and destructive girl with a knockabout past.

It is questionable whether Miriam John has lost some essence of the story in translating this French Jean Anouilh play. It is as questionable to wonder whether the playwright him­self has produced a work which, in spite of a few merits, is altogether lack-lustre.

The play contains countless un­comfortable similes like ”Julia’s smile is like white water at night” and “It’s as if your love was running like water through my fingers.” The dramatic pause-before-exiting tech­nique was also run into the ground, as were those constant disbelieving stares our star-crossed lovers would bestow upon each other. These stares only grew the more comical as they began to resemble the same sort of looks lobotomy patients give when watching Pat Boone on televi­sion.

The story begins when a young woman, Julia Maurin (Alicia O’Don­nell), has decided to introduce her fiancee, Frederic La Riviere (Peter Lock) and potential mother-in-law (Dawn Coulbourne) to her family. She does, however, have her reser­vations. Her father (Garrett Keller) is a lazy, cigar-smoking philanderer. Her brother, Lucien (Robert Town­send), is an embittered and bitingly sarcastic loser-at-love. Her sister, Jeannette (Rosanna Eller), is a crus­ty little tart who skips mornings to sleep in after a hard night of being a paid part-time “kept” woman.

Come lunchtime, Frederic’s moth­er, concerned with taking over the household and finding a meal to prepare, is forced to kill Leon, the family chicken and household pet. Enter Jeannette. Furious, enraged and looking, or at least trying to, like the wrath of God.

Following the chiding of Frederic’s mother, the lovelorn Fre­deric begins to cast his eye away from his rattling, worrisome, busy­ bee-of-a-fiancee toward her sister Jeannette – that trashy, thrashy, self-sympathetic coquette and con­summate liar.

Sound good so far? Well that’s as good as it gets. With the exception of the confrontation scene of the two sisters later in the play, in addi­tion to Lucien’s visit to the lover’s hideaway shack in the woods, the rest of the story gets thick with sap and becomes very much like watch­ing Custer’s Last Stand – in slow motion.

What happens after this is quite tedious. Jeannette’s lies begin to catch up with her, and Frederic repeatedly becomes furious and for­ giving at the drop of a hat. After dallying with this ploy for an unbearable amount of time, toward the conclusion, Jeannette is mar­ried to Lazarius, and Frederic is go­ing back to Julia on the rebound.

On her wedding night, Jeannette goes out to shore to kill herself (both the Maurin girls suffer from an annoying inability to cope with life). Her true love, Frederic, goes out to save her, and the two of them suc­cumb to a tide which sweeps them away to sea.

Tragic? Not really. Many were rooting for the tide, anyhow. Those who weren’t were at least grateful that the delightfully colorful minor characters were still alive.

If this play didn’t sominex you, it was probably saved by the vivid portrayals rendered by the  talented cast.

O’Donnell was extraordinary in her portrayal of the China-doll-like Julia. So impressive was she, that if you weren’t rooting for the giant tide that swept Frederic and Jeannette out to sea, you were rooting for Julia – the only success of the entire lot of Maurins.

Townsend displayed tremendous growth and progress as a performer in his role of the embittered Lu­cien – perhaps the only character who gave us real insight into the character summations of Frederic and Jeannette. His appearances were well anticipated and thor­oughly enjoyed. Townsend  gave us a character who uses his wise­ cracking, knock-em-dead earthiness to fire up any dull scene.

As Frederic’s mother, Coulbourne emanated a remarkable sense of maternal care and fastidiousness. Her performances were definitely one of the evening’s standouts. Her deadpan deliveries were well-timed, and her facial indifference was ab­solutely priceless.

As usual, Keller gave a top-notch and incredibly funny performance as Julia’s, Jeannette’s and Lucien’s don’t-give-a-damn father. His spar­kle, talent and wit breathes life into his role, and, like Coulbourne, is ex­tremely effective and powerfully convincing.

Lock, despite being dished some of the most maudlin pap he’s ever received, was able to keep himself above water with his professional skill intact. He’s indicated that he can hack the breaking-down-to-tears bit and make the most of any role.

Overall, the faults which do lie in Romeo and Jeannette are not on the part of the director, behind-the-scenes wizards or the performers. The play was probably not the best selection for the Dailey Theatre stage, yet was a half-heartedly successful attempt at displaying the Theatre Department’s vast wealth of talent as applied to this different and unique kind of love story.