The University of La Verne Baseball Team picked up its first wins of the season last week. It faced the Caltech Beavers in the afternoon game of a split doubleheader on Friday. With strong pitching from Scott Root and Ray Larsen, and a good day from everyone at the plate, the Leos took the game 18-1.

In the nightcap La Verne en­countered a much stiffer challenge from Sonoma St., although for a while it seemed the Leopards would pick up where they left off against Caltech. They managed to score three runs in the bottom of the first as Ron Hubel singled home Eric Smith who singled earlier and advanced to second on a fielder’s choice. Alan Macleod’s two­-run home run gave ULV a 3-0 lead.

The two teams continued to score, but La Verne was not up to the task and finally fell, 10-6.

The next day the Leopards traveled to Pasadena to take on Caltech in another SCIAC doubleheader. The opposition didn’t threaten the Leos much in either game. La Verne got another strong pitching performance from senior Rob Powell and sophomore Ben Cordova. It was the aggressor at the plate, with Macleod (3 for 7, 5 RBIs in both games) and junior Jon Davenport (2 for 6, 4 RBIs in both games) leading the charge. It maintained control from the beginning, winning game one, 12-4.

In game two, senior Tim Wells and junior Adrian Williams pitched another strong game. Everyone got to play in this game as the Leos stepped on the gas pedal and didn’t stop until the game was over with a final score of 21-2.

After two days’ rest, the Leos traveled to Azusa Pacific in a non­conference game last Tuesday and suffered their worst loss of the season at the hands of the Cougars, 14-1.

Trying to explain what happened, Head Coach Owen Wright said, “We just beat ourselves today.” He added that if the team would stop worrying about how it might lose games and just play to its potential, it will start winning some games.

“Azusa was a pretty strong NAIA team, but not 13 runs better,” said Wright.

Following tomorrow’s doubleheader against Cal Baptist, the Leos will start a six-game home stand on March 1 against Southern California College at 7 p.m. 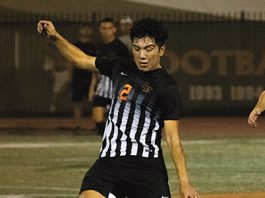 Men’s soccer drops a close one to Santa Cruz, 1-0