By Esmeralda Sandoval, Jenny Bauer on September 21, 1990 in News 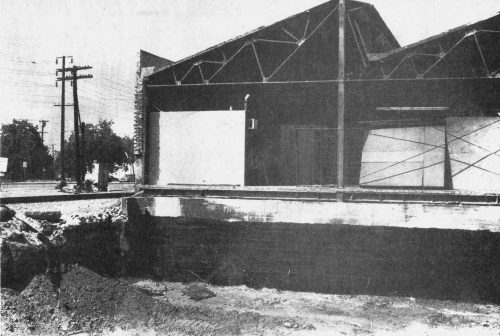 REPAIRS CONTINUE – This warehouse has been leased by the University of La Verne with an option to buy. The University leased the building in order to relocate several departments, including purchasing, warehouse, housekeeping offices, print shop and the mail room. Although no completion date has been set, the University hopes to be finished by October. Far West’s warehouse required significant construction to the east wall and basement, following earthquake damage suffered last February. / photo by Esmeralda Sandoval

by Jenny Bauer
Editor in Chief

Nearly 100 years ago it housed a lemon packing company. Last February it was extensively damaged – and became a media star – in the 5.5 Claremont earthquake. Now, this historic building, called the “Far West” building after its current tenants, will become a part of the University of La Verne campus, housing, perhaps by October, ULV’s Purchasing Department, warehouse, housekeeping office, printshop and, eventually, mail room.

Leasing of the building, with an option to purchase, is needed, said University officials, to bring the ULV Purchasing Department and warehouse closer to campus. The Far West structure is located at the corner of D and First streets, adjacent to The Oaks dormitory.

“This has been a long and lengthy process,” said Dr. John “Skip” Mainiero, vice president of finance, who has drawn up final plans to lease the structure. “We have been looking forever to find a facility closer to campus for the warehouse,” said Dr. Mainiero.

ULV President Stephen Morgan emphasized that ULV is land locked and that acquiring additional land is not easily done. “It is a great opportunity to acquire additional land. The beauty of it is that we bring other ULV departments directly onto the campus.”

The moving of several departments to the Far West building has been anticipated for some time; the University was on the brink of signing a lease agreement when the building suffered extensive damage in last year’s Feb. 28 earthquake. On that day, the complete eastern wall collapsed and the building became a media icon symbolizing area earthquake damage. ULV officials had to then wait for the building owners to decide what action would be taken.

Far West owners opted to renovate and reconstruct in early August. Instead of rebuilding the wall and section of building that was damaged, the section was completely removed, along with the basement of the facility. This razed unreinforced brick portion made up what actually was the original building. The structure that currently stands undamaged, and which ULV will utilize, was an addition built on in the mid-1930s.

While the Far West owners have agreed to renovate the building completely, allowing ULV to rent the facility, with an option to buy in 1998, ULV must fill the hole that was created when the basement was struck down.
ULV officials are pleased with this arrangement, though, saying it allows the hole to be filled in such a way that if the University does indeed purchase the land, building may be done on this site.

“We want to spend the time and money compacting the soil now so that we will keep our option to build later,” explained Brian Worley, ULV supervisor of buildings and grounds.

Compacting the soil is a lengthy process that involves laying imported soil in layers until the hole is filled, meaning that each 6-inch layer must be rolled thoroughly with heavy equipment. When this is complete, the land will be strong enough to be built upon, said Worley. He added that this procedure will be carefully monitored by the city of La Verne in order that the land be certified for the future building. For now though, ULV plans only to pave this space and create an additional parking area.

Upon completion of the renovation of the building and the compacting of the soil, the University plans to move several departments into the facility. Although no date is set, administrators are hoping for an October move-in.