On Sunday, May 24, over 1,000 ULV undergraduate and graduate students will graduate in what is being touted as, “The centennial graduating class of ULV,” according to Ruby Cordova, director of student activities and chair of the Commencement Committee.

“We celebrated our centennial last year, because that’s when the doors (of the University) first opened,” Cordova explained. “But there wasn’t a graduat­ing class that year, so this our 100th graduating class.”

Another unusual aspect about this year’s commencement ceremony is the fact that there will be no keynote speaker. Instead, students will be fea­tured as the main speakers of the day. Cordova said that several factors attributed to this decision.

“We had an original list of possible speakers, but the committee had con­cerns about some speakers, and we came up against a deadline. To be hon­est, it’s kind of hit-and-miss,” she said. “Also, we don’t have a budget for a speaker. We can offer a small honorarium, but that’s all. For someone famous, the fee can be $10,000 and up for a 15-minute talk.

“In the future, we would like to hear from the seniors about who they would like to see speak. We also need help with contacts from students, fac­ulty and alumni.”

Cordova stressed, however, that she feels the decision to feature student speakers was a good one. “In the past, we have had wonderful student speakers.” she said. “Students have really enjoyed listening to their peers because they can bring some personal­ization into their speeches. They have experienced La Verne, and the other students can identify with them. At the post-ceremony reception, when people are talking about what they enjoyed, it is often the student speech­es that stand out.”

At the undergraduate ceremony, where both central campus students and those of the School of Continuing Education will receive degrees in more than 42 major categories, featured speakers will include Kenneth Ray Chrisp, who will deliver the invoca­tion; Carla Bauer, graduating student speaker; Lura Poggi, who will present the senior gift; and Nancy Adams, who will deliver the benediction. The national anthem will be sung by Giloh Morgan, and other featured singers will include Cathy Fleisher, Sandra Caddy, Kimberly Kampmeier, Dennis Keeley and Lisa Madrid.

“We are extremely prideful of our student speakers and performers, because they are so diverse,” Cordova stated. ‘They are really representative of the student body. There are a lot of question marks out there, and they’re the ones who are going to be faced with the challenge.” 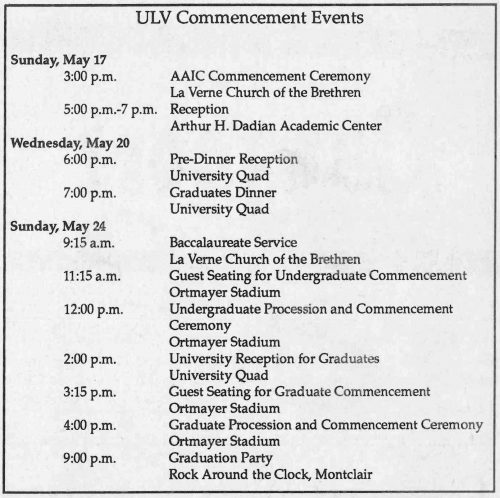