University of La Verne Safety Coordinator Jeff Boster stands at the south entrance of an old conveyor tunnel in the maintenance warehouse. The tunnel extends under First Street for more than 150 feet on the north side to the maintenance warehouse on the south side. The tunnel was used by the citrus packing industry when the building was a packing house. Today, the tunnel is blocked on the north end and lies unused. / photo by Ryan Sones

text and photography by Ryan Sones

For the past couple of weeks, I have ventured into corridors, attics, 92 year-old basements and tunnels under roads to capture the hidden places at the University of La Verne, the places the average passerby would not see.

I was led on the excursion by the ULV Safety Coordinator Jeff Boster. Boster has worked for ULV for more than 15 years and knows of all the nooks and crannies around, under and above campus. 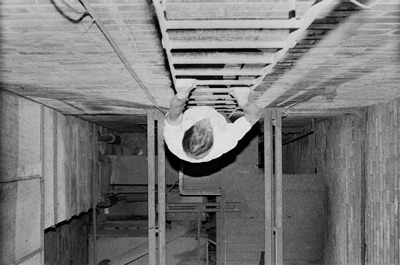 Boster makes his way up the second set of ladders in the W.I.T. Hoover Memorial Library clock tower. The building was constructed and dedicated in 1951 to William I. T. Hoover, who spent 30 years with the college. The building has been the home of the University of La Verne College of Law since 1977. The graduating class of 1991 restored the clock, as a class gift, to working order after the clock was inoperable for many years. The now-functional clock entertains listeners everyday at high noon and at 5 p.m. with the alma mater, and Christmas songs during the seasons. / photo by Ryan Sones

The journey began as we pulled up to the Law School entrance and Boster said, “Well, we had better get up there before she rings again, because we really don’t want to be in there when that happens,” as I stared up to the clock tower. How many people at La Verne actually knew or thought you could climb up to the top of the clock tower? It was actually spacious and felt much larger on the inside than it appeared from afar.

Next, we traveled to the other side of the mall to the third floor of Brandt Hall. He showed the way to a half-door in the study that he said was an attic and basement in one. Before me was a 100-degree-plus crawlspace nearly 75 feet long. It was actually a crawlspace in between the second and third floors of Brandt.

The next location was La Fetra Hall, where we clambered up a metal staircase and into what looked to be a computer graveyard. Outdated computer hardware came to rest in peace, stacked without a single outlet to be seen.

If you have ever done any exploring around campus, you may have noticed that the main staircase in Founders Hall ends at the roof by a locked metal door. The next step called for the lock to be opened as we ventured onto the roof of Founders. Boster then unveiled a covered passage on the roof which led to the attic. Nearly able to stand, I found myself staring at the interior workmanship of those who rose the walls of Founders Hall 72 years ago. 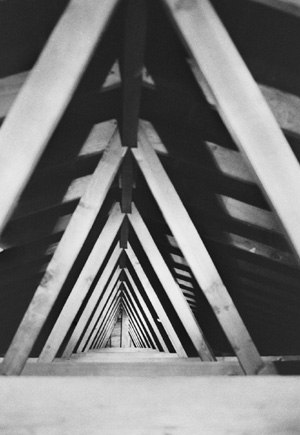 After entering a half door in a study room on the second floor of Brandt Hall, one sees a stretch of 2″x6″ framing timbers. The attic/ basement, extending nearly 100 feet, serves as a crawlspace for any work that may need to be done to the building or heater vents. Brandt Hall was constructed in 1962 and dedicated in memory of Jesse Brandt, who gave 42 years of service to La Verne College. / photo by Ryan Sones

As we returned from the roof of Founders into the regular hallways traveled by all, Boster said, “You ever heard of the ‘Bone Room?'” I never had, so we went and spoke with Dr. Bob Neher, professor of biology. Dr. Neher cleared access to the Jaeger Museum, an exclusive room in the Mainiero Building that the Natural Science Department uses to store artifacts and fossils, including many old bones. These were bones as old as the saber-toothed cat and others recovered from the La Brea Tar pits and other excavations. There is a certain eeriness about being in a room with artifacts hundreds of thousands of years old.

Our next venue was one of the oldest fixtures on campus, the Hanawalt House. Actually, we went under the house into a basement nearly 100 years old. Again, just as atop of Founders Hall, you could see the workmanship of 92 years past from the hands of past La Verne College President W.C. Hanawalt.

The climax of our ULV walkabout ended beneath the Operations Building on First and E Streets. The building was formerly a packing shed and warehouse for the orange growers of the area. After walking through stored desks and chairs from various departments around campus, and artifacts from the Lordsburg dig, we came upon a hole in the wall. This was not just a regular hole in the wall, though. After piercing the abyss of pitch black with a flashlight, there appeared a tunnel that extended the width of First Street. The tunnel dates back to the building’s days as a citrus warehouse, reportedly used to be a conveyor belt that traveled from the warehouse across the street.

The exploration expressed many views, without words, of what La Verne College and Lordsburg once were. Knowing I was standing in unexplored rooms nearly 100 years old, I was entrenched in a certain aura of the school. The experience was mindbending. 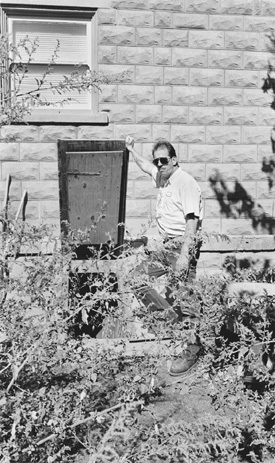 University of La Verne Safety Coordinator Jeff Boster shows the way to the nearly 100-year-old foundations of the Hanawalt House. The structure was built in 1905 by La Verne College President W. C. Hanawalt. It was purchased by the school in 1973 from Hanawalt’s widow, Pearl. It began service as the Child Care Center after renovations were completed in 1976. Presently, it serves as the University Counseling Center, which took over the house in 1991. / photo by Ryan Sones 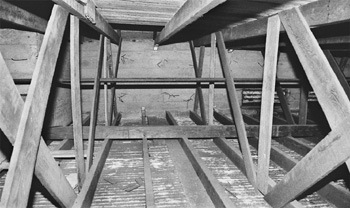 The five-foot high attic of Founders Hall shows the durable construction techniques of the past. Founders Hall was finished and ready for occupancy in the fall of 1926. The concrete building housed the library, classrooms and offices of the entire college. / photo by Ryan Sones