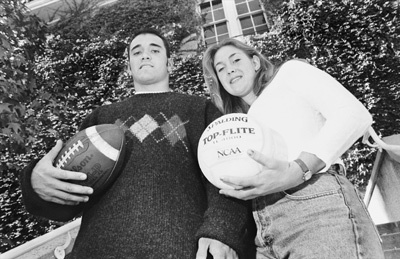 Senior linebacker Anthony Russo and sophomore outside hitter Sarah Henry have been selected by the Campus Times as “Athletes of the Fall”. Russo was the recipient of the John Zinda award and was co-defensive player of the year. Henry was a first team All-SCIAC selection as well as All-West Region for Division III. / photo by Ryan Sones

Russo was just recently awarded the John Zinda award and co-defensive player of the year (along with senior defensive linemen, Tawan Hall from Whittier College) for the Southern California Intercollegiate Athletic Conference (SCIAC).

This is the second year for the John Zinda award, which is an award named after the former head football coach from Claremont-Mudd-Scripps.

The criteria for the award are a high level of performance, strong leadership, integrity and sportsmanship, a positive attitude and being a conscientious student.

“The John Zinda award goes to the most outstanding player in the conference who also possesses characteristics such as, work ethic, competitiveness, good sportsmanship and good academics,” said Don Morel, head football coach. “It is a tough award to receive and is the highest honor that the conference has to give.”

The 6’1″, 215-pound linebacker has led the team in tackles for two years, with 68 this season, and gives all the credit to his teammates.

“I wouldn’t have done as good as I did if it was not for the entire [defensive] line,” said Russo. “I’m happy and proud but I wish we could have gone undefeated as a team.”

“Anthony is a tremendous leader and student, he will be very hard to replace,” said Morel.

Russo received both awards because, “all the coaches in the conference felt Anthony was by far the best linebacker they have seen in SCIAC,” said Morel.

Henry was awarded first team All-SCIAC for the season because she led the conference in kills with 314 and had 87 blocks during the regular season for the Leopards.

“I wasn’t expecting it at all,” said Henry. “I couldn’t have done it without Mercury’s help.”

“She matured a great deal as a player when I asked her to move from right side hitter to middle blocker. She was reluctant, but she agreed to it because it was the best for the team,” he said. “It was one of the moves that made us a more competitive team this year. I think she is the best middle blocker in the conference.”