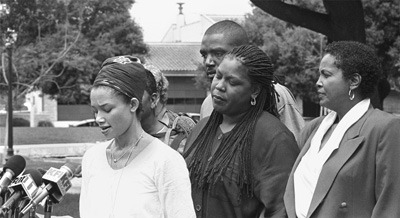 Along with her aunt Claudette (far right) and her close friends, Joju Younghi Cleaver, the daughter of former Black Panther Eldridge Cleaver, gave the local press a chance to hear the family’s reaction to Cleaver’s death two weeks ago from a heart attack. The press conference was followed by a memorial service honoring his life, featuring a message given by close friend Dr. Richard Rose, assistant professor of religion and philosophy. / photo by Scott Harvey

University of La Verne students, faculty and staff gathered with friends and family of Leroy Eldridge Cleaver to honor the historical figure at a memorial service last Thursday, May 7.

The consultant to the Coalition for Diversity died May 1 of a heart attack due to complications with diabetes. He was 62.

“My father’s light is no longer in this world, but left in my brother, Maceo Eldridge Cleaver,” Joju said. “His light burns as bright as ever in my heart.”

Cleaver’s family and friends took their seats in the front rows of Founders Auditorium. With support and appreciation, several hundred individuals filled the remainder of the room.

“He challenged us to know and accept ourselves, and worked to promote the Peace Studies Program,” said Debbie Roberts, Protestant campus minister.

Dr. Sharon Davis, professor of sociology and criminology, spoke of the first time she met Cleaver.

“When I spoke to Mr. Cleaver, I realized he was much too large a person to share within myself,” Dr. Davis said. “Eldridge liked to talk.”

And Cleaver did just that. On Nov. 17, 1997, he spoke to the ULV community as its visiting scholar for the day. The author and artist spoke of his Black Panther days and the “evolution to the revolution.”

In his short time at the University, Cleaver valued the relationships he had established. He was often seen eating lunch with students in the dining hall.

“He was always there to listen, and he gave me a whole lot of knowledge,” said Wilson. “On several occasions we would sit and talk; he would encourage me about my work.”

Edmond said, “To be able to sit and talk with someone of that caliber did a lot for me and my people to go on and make peace.”

Later in the service, a recording of Cleaver’s main address was played, in which Cleaver told of his conversion, through which he first discovered God.

Dr. Richard Rose, assistant professor of religion and philosophy, spoke of Cleaver’s impression on the University saying that “we were the last community to claim him as their own.”

Dr. Rose said. “Let the records show that this is where the story of his life, on this side of eternity, ends.”

Chef cooks up ideas for Davenport
Class of ’98 awaits degrees