By Michael Anklin, Summer Herndon on October 23, 1998 in News 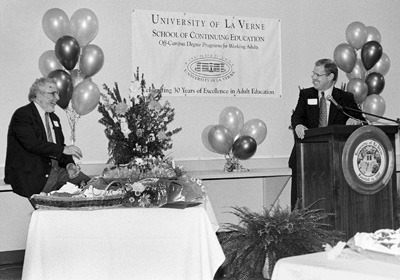 The University of La Verne’s School of Continuing Education celebrated its 30th anniversary at its offices in Upland on Wednesday.

President Stephen Morgan and Dr. Jim Manolis, dean of the School of Continuing Education (SCE), spoke at the occasion. Also present were campus directors from Orange County, San Fernando Valley, Ventura County, the Inland Empire and ULV’s Board of Trustees.

“During these last 30 years, SCE has contributed greatly to the growth of ULV,” said Dr. Manolis. “These adult students, I believe, have enhanced La Verne’s education around the world.”

Dr. Manolis said that each year SCE has over 4,000 students enrolled in four, five or even six terms at various centers.

SCE plays a major role in contributing money to the University. The contributions are used to help support the University service and many full-time faculty members. They are also put into a general fund for building projects and other necessary uses.

“We at SCE are proud of helping to support the University while delivering quality programs to adult learners,” Dr. Manolis said.

Dr. Manolis thanked the Board of Trustees, the faculty, the administration and the classified personnel for their support of SCE.

“The University is strong only when all the colleges and schools that comprise the University and all the support programs work together to enhance the whole,” he said. Dr. Manolis then introduced Dr. Morgan.

Dr. Morgan took the audience back to July 1, 1968, the day Leland Newcomer became president of the University, which consisted only of the main campus in those days.

Dr. Morgan said that within the first month of his presidency, Newcomer decided that “we need to open our doors to the world. There are adult students out there who need what we have to offer.”

Newcomer decided to make money through educational programs rather than through fundraising.

“Probably the single most important and history-changing decision made in the 107-year history of the University of La Verne was to start an off-campus program for adults which later became the Continuing School of Education,” Dr. Morgan said.

“It was a grand experiment and 30 years later it is alive and healthier and contributing enormously to the success and reputation of the University of La Verne,” he said.

“It is a very important part of our mission to provide educational opportunities for people of all ages who want to prepare themselves to pursue their dreams,” Dr. Morgan said.

He said that the key to the success of SCE has been the leadership provided by the deans. Dr. Morgan said Dr. Manolis has been an especially strong leader, who “bridged the gap when the gap needed to be bridged.”

For 30 years, SCE has offered off-campus degrees to working adults in locations throughout California, Alaska, Italy, Greece and Singapore.

In California, the school delivers these programs for people working in businesses, education, public agencies and health care.

SCE provides the logistical support to enable adults to integrate the school’s programs into their working schedule.

The Western Association of Schools and Colleges (WASC) recognized ULV as the “pioneer in adult education and model of off-campus program delivery” in a recent accrediting review report.