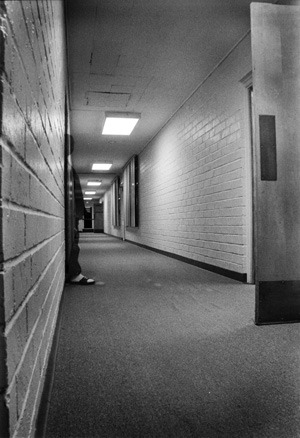 All is quiet at 3 a.m in the halls of the women’s residence hall. The residence hall was dedicated, with the aid of a government loan, in May 1956 in honor of Ellis M. Studebaker. In life, Studebaker never knew the hall; he passed away in December 1954, 20 months before its completion. Two years later, Hanawalt Hall was added in honor of the family’s contribution to the college’s financial stability. / photo illustration by Michael P. Bailey

Call it a trick of the eye, or an urban legend, but, as Halloween approaches, many around campus are testifying to paranormal happenings.

“This house always had a lot of creepy little noises. It creaks as if someone is walking around even when I’m all alone in it. The wood creeks and the windows blow out. You can often feel someone close by watching you, yet no one is around,” said Marcy Garcia, international student organization coordinator, of the house in which her office is located at Third and B streets.

Garcia is not alone in her experience with strange happenings around campus. There are also other unexplainable stories about ghosts in Founders Hall, Dailey Theatre and Stu-Han Residence Hall.

She went on to explain that the house used to belong to her grandmother who had burned to death in the room that is now Garcia’s office. Back then, it used to be the old lady’s kitchen. It is believed that the old lady was cooking when her sleeve caught on fire. By the time the fire department arrived, it was too late.

The old lady’s family was upset about the incident and sold the house. They still live near the residence, but refuse to come in.

In 1997, after a paint job in the building, Garcia brought in some pictures by Frida Kahlo, her favorite painter, and set aside a corner of the office for Kahlo’s work.

“I put up the pictures and I have a feeling that she [the grandmother’s spirit] didn’t like one of them, because the next morning when I came in one of the pictures was thrown on a nearby chair,” said Garcia.

The picture was taped up again, and the next day the same thing happened. Garcia and her student workers asked security and housekeeping if anyone had entered the house at night, but no one had. Finally, one morning Garcia found the picture tucked away behind a plaque on a nearby shelf.

“I leave it there and nobody has touched it ever since. I respect her and if she doesn’t like it, I won’t put it up,” said Garcia.

“As soon as I stepped in the door I knew that someone had died here. My mother tells me it’s a gift that I have. Everywhere I go I know if something happened there,” said Linda Velasque, University of La Verne housekeeper.

Velasque has been cleaning the ISO house for three months, and she too, said she has witnessed the unexplained.

“There is this stain in my office. Linda asked me what had fallen there and as far as I and my student workers know, nothing had fallen. Linda scrubbed it and it went away, but then a few days later it reappeared,” said Garcia.

“You feel creepy little things, but I know that this used to be someone’s house. The lady grew up here and it was in her family for a long time. This is her house. She liked this house and I respect her and the house,” said Garcia.

The house was transformed into the ISO in 1992. It was poorly kept, but Garcia helped to fix it up.

“I respect the house a lot. I like it a lot. I’m taking care if it and I think that she knows that I like the house very much, so she’s fine with me,” said Garcia.

“If I’m alone here I keep the door open so that she can go away,” said Janet Torres, student worker.

There are also claims of strange noises, footsteps and screams emitted at Stu-Han. According to a story of the past, a female student killed herself in one of the residence hall rooms; since then there is constant banging on the walls and the ceiling, even when no one is present.

“I hear someone breathing really loud or snoring; I go out and no one is there and it’s not coming from my neighbors,” said senior Lynsey Best, who lives in the “haunted” room.

Rumor has it that the breathing sound is made by the girl’s ghost. It is the sound of her choking.

There is other paranormal activity in Stu-Han, however. Another story is of a female student who heard an unexplained noise while she was in the rest room. As it goes, when she went back to her room, she saw the letters “DY” inscribed on her ceiling. It was explained that the letters were put there by the previous residents, but the woman claims she and her roommate have never seen them before.

“It is visible under a certain light,” she said.

There is constant activity in one of the rooms as well. The lights flicker, footsteps are heard and constant banging comes from the walls.

“That’s my ghost. I think that it’s a boy. Often he turns off the lights on me, but that’s about it. I don’t mind having him here because I’m so used to him. I feel disturbed when he’s not here,” said junior Stu-Han resident Mindy Salazar.

Founders Hall is also a haven for rumors, especially with the suicide of August 1978. Then Audio-Visual Director David Glasa committed suicide after his girlfriend broke up with him.

This incident has given credence to unexplainable noises and footprints heard throughout the night. The myth is that sounds of doors slamming and running when no one is in the building can be heard.

A contribution to the unexplained activities also has been attributed to Gladdys E. Muir, former professor of Latin and Spanish. After founding the Peace Studies Department at Manchester College in Indiana, and teaching there from 1948-59, Muir retired and taught part time at ULV. In 1967, she died from injuries incurred from a fall down the stairs on the east side of Founders Hall.

There are also commonly heard rumors about Dailey Theatre and the murder of ULV student Jim Henderson in 1983. Henderson and a friend had gone up to the desert to work on a film project, they were approached by two guys who wanted a ride, when the ride was denied, the two strangers left and later returned with guns, opening fire and killing Henderson.

After his death, students claim they could feel the presence of someone in Dailey’s dressing room.

While there are no tangible proofs of these paranormal happenings, they are constant and witnessed by numerous students and faculty. They keep students from turning their lights off at night.