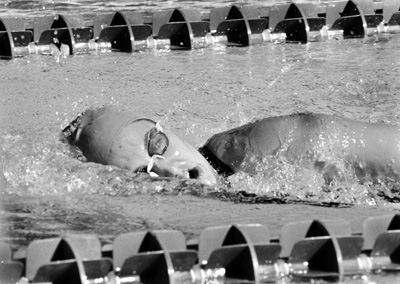 A phrase that will describe the University of La Verne men’s and women’s swimming teams all season will be: That was the first time the Leopards did (insert record/event here).

And since this is the season of firsts for La Verne, last Saturday was the Leopards’ first invitational.

The ULV men’s team, swimming against SCIAC foes at the Pomona-Pitzer Invitational, placed fifth with 33 team points in the nine-team event.

The La Verne women fared better, as the Leopards ranked fourth with 88 points, behind UC Irvine (195.5 points), Claremont-Mudd-Scripps (143) and Pomona-Pitzer (126).

“We swam extremely well,” La Verne coach John Hallman said. “They [ULV swimmers] were a little tired because I had them working out hard.

“I looked at the invitational as a marathon meet, and I had our swimmers in six or seven events because in [the SCIAC] finals that is how many events they will have to swim.”

Freshmen John Chon and Ryan MacDonald paced the men’s team, as the two combined to finish in fifth or higher in four events.

Currently, the men’s team is short-handed and that is due, Hallman said, to water polo season.

“We are waiting for polo season to end,” Hallman said. “You will see teams get [more men swimmers] after the season ends.”

The Leopards continue their season tomorrow with a meet at Santa Clara.