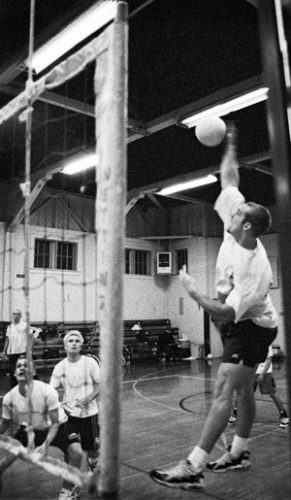 The men’s volleyball team, which earned a No. 2 finish in Division III last year, is about to begin its season. Sophomore middle blocker Jason Kolodge, freshman middle blocker Thomas Hilton and junior setter Matt Wright set up for the defense as senior outside hitter Sean Douglas goes for a kill during a scrimmage at practice in the Old Gym. / photo by Michael P. Bailey

After coming off the best season the University of La Verne men’s volleyball team has ever had, second year head coach Jack Coberly is not only looking to improve upon last year’s championship team.

He is also looking to achieve a goal the men’s team has had since the inception of the Division III National Championships just under four years ago — to win the national title.

“This year we need to use our seniors as models for the younger guys, because we either have experienced players or we have very inexperienced players,” said Coberly about this season’s team and the importance of the seniors on the team. “The most difficult thing this year is going to be to get this team to work together.”

After losing four seniors last year, it might seem that the team may lack some experience needed to return to the small college final four.

To a point, this is true, but the team has not lost the entire graduating class completely. Coach Coberly managed to retain his son, All-American Morgan Coberly and Jason Flick, last years middle blocker, on the team in assistant coach positions.

“Coaching is a little weird because I played with half the guys on the team the last couple of years,” said assistant coach Coberly. “I have to find a different way to coach them than I would the freshmen.”

Peterson, who led the team last year in digs and was second in kills, almost did not return this year.

“I wasn’t going to play this year, and I decided I just wasn’t going to finish out my career,” said Peterson. “Then November came around, and I started to have dreams and stuff about playing volleyball.”

Those dreams have motivated Peterson to try to play again, and he found that for the first time in a long time he has regained “the whole spirit of volleyball.”

The Leopards also add a couple of junior college transfers, which, if history holds true, will have a huge impact on the team’s success.

In the last two years, La Verne has produced two All-Americans, both of which have been from Southern California junior colleges in Rob Snyder, Long Beach City College, and Coberly, Orange Coast College (OCC).

This year, junior setter Matt Wright, from OCC, and junior utility player Luis Cruz from Mt. SAC join the squad and look to make big contributions to the team.

Coach Coberly said he will implement a brand-new position to ULV volleyball that no one has ever seen in a utility position.

Because the team has no true middle position, coach Coberly is training a number of players who have not specialized in that position.

“We are developing an offense that is centered more around the idea of using utility players rather than set position players,” said coach Coberly.

These utility players will be used interchangeably and will make up half of the offense. There will be a setter, a middle and a swing position along with three utility players, who instead of specializing in just one position, will have to learn three.

“I think we have the talent to do that,” said coach Coberly about the inception of his brand new offense.

Letter to the Editor
‘Seinfeld’ish subjects sum up fall 1998