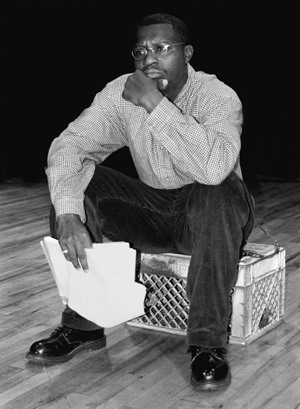 Senior LaVelle Wilson examines his script after rehearsal of “O.N.E.” Wilson wrote more than half of the script for his senior project. His play opened last night and runs tonight and tomorrow night in the Cabaret Theatre. / photo by Christopher Heinrich

“Obstinate Nubian Essence” (“O.N.E.”) is a combination of literal meanings which, when combined, mean a biographical reflection of senior LaVelle Wilson’s life.

Wilson, a theater arts major, describes “O.N.E.” to mean “not easily removed and subdued,” and also the name of his senior project.

Abstract meaning aside, “O.N.E.” means much more. It is a refined compilation of Wilson’s life, experiences and reflections.

Comprised in part as his senior project for theater, Wilson has written, directed and performed in “O.N.E.”

It tells a “message to youth about decisions after high school,” he said. It deals with life-making decisions youth are faced with upon completion of high school.

Moreover, it is a “story through poetry” as expressed through Wilson’s words. However, all the actors in the cast have contributed to the piece as well.

“Everyone who speaks wrote their piece,” he said.

Following two months of writing and four weeks of preparation, “O.N.E.” was rehearsed three days prior to its opening night.

With 10 people in the cast, only one having a theater arts minor, Wilson said he feels “real good because of the progress.

“Especially because of my cast. They are great. The rest was what I brought out and what I helped them bring out themselves.”

Deeper than simple reflections, Wilson admits “O.N.E.” was a turning point in which he realized where he had down-falls in life.

“I was on the same road,” said Wilson, about reflections made on past decisions and triumphs.

“I was almost at the point where I was ready to say ‘F’ life, but now, regardless of my situation I will stick things out. Today I have a junior college associate’s degree and I will graduate in May.

“In 1995, I found out I had a gift in poetry.” That year, Wilson triumphed in personal, family and school situations.

“I had a hard time finding myself. For my senior project I was encouraged to write,” he said of those decisions and its changes.

Wilson said, Dr. David Flaten, chair of the Department of Theatre Arts, proposed he direct two plays and encouraged him to do “O.N.E.” as his senior project.

“It was beautiful, I discovered I hadn’t lost the beat.”

Wilson, who performs as a hobby, said he “helped [her] out. He is a great director. He listens to what you have to say.”

“It is different, harder than what you think it would be. It is hard to place yourself into someone else’s character.”

However, with Wilson’s help, Brown said her negative impression of “O.N.E.,” changed first from “I didn’t like it” to “I understand the underlying meaning” which, according to Brown, “he’s really good at.”

The performance will take place in the Cabaret Theatre at 7:30 p.m. tonight and Sunday.