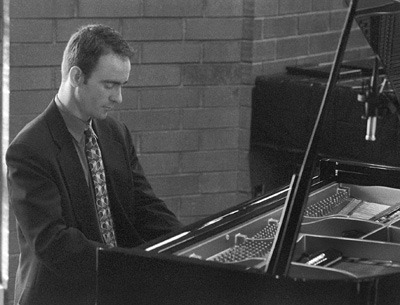 The Chapel was filled with beautiful sounds of music Wednesday, as Dr. Peter Green, assistant professor of music at Los Angeles City College, gave a recital that was sponsored by the University of La Verne Music Department.

Green is a native of Canada, where he attended the Memorial University of Newfoundland. While he was completing his undergraduate studies, Green appeared twice on CBC Television, demonstrating his musical ability as a seasoned pianist.

This accomplishment led to Green being chosen to study at the Guildhall School of Music and Drama, in London.

After completing his undergraduate work, he received his master’s of music and doctorate of musical arts degrees from USC, while studying under Stewart Gordon.

The program lasted approximately one hour, while Green played the piano to the music of Canadian and French composers. Some of the highlights of the program came from pieces written by Frederic Chopin, Claude Champagne and Francois Morel.

Green is the music director at the First Presbyterian Church in Monrovia, and many of his choir members came to hear him play at the recital.

Anita Hanawalt, senior adjunct professor of music, is also the organist at First Presbyterian Church. She arranged for Green to give a recital at ULV, hoping that students would take the opportunity to come and hear such a talented musician.

“We are very fortunate to have him as our choir director, and Anita as our organist,” said Jacqueline Martin, who is a member of the First Presbyterian Church.

Many of the songs that Green played were unique. According to Green, “Most songs carry the melody in the right hand. These songs are interesting because the melody is carried in the left hand.”

Playing the piano has been a part of Green’s life since he was a young boy. For 22 years he has enjoyed every moment of learning music. Green says he is fortunate because his profession is his passion.

“I started playing piano at age 9, and my parents never had to push me to practice. I always loved to do it,” Green said.

In addition to directing a choir, teaching and playing recitals for interested listeners, Green is currently working on putting his church choir together with an orchestra for a concert April 1, at 7:30 p.m.

He is encouraging people to come to this free concert at First Presbyterian Church in Monrovia, to hear a night of wonderful music.

Green also teaches private piano lessons. When asked what advice he could give to hopeful piano students, he replied, “Keep practicing, and make sure that you love it.”

For any who regret missing the opportunity to hear Green play in a recital, it is not too late. This program will appear once again on April 6, at LACC.

Upcoming Music Department events include, “Alex Martinez and Friends” will perform an evening of Jazz on April 9 in Founders Auditorium. A student recital will take place on April 22 at 4 p.m. in the Chapel. For more information on these events call ext. 4915.