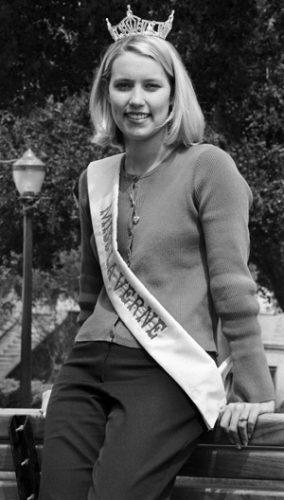 Junior Dana Hazen received the title of Miss La Verne after a competition against 9 other women during the pageant on Jan. 23 at the La Verne Community Center. She now dedicates her Saturdays to ribbon cutting ceremonies and assisting at other beauty pageants. In June, she will be competing for Miss California. / photo by Chris Heinrich

For years, young girls have sat in front of their television sets, dreaming of being on stage, looking radiantly beautiful and being crowned Miss America.

The title has come a long way, and an incorporated microcosm of the pageant has been established in the city of La Verne.

On Jan. 23, the La Verne Community Center hosted the second annual competition for the title of Miss La Verne.

Ten women, ages of 17-24, participated, six of which were from the University of La Verne. Three of the six from ULV received titles in the contest.

Laine North, executive director of the Miss La Verne pageant, spoke of Hazen’s qualifications for the title, “This girl is a La Verne girl. She’s a fifth generation American and has lived in La Verne her entire life.”

Hazen received $700 in scholarship money along with her crown. Her responsibilities are participating in ribbon cuttings for the city, all new business openings and other city events. She will compete for Miss California in June.

Hazen played “Castle on a Cloud” from “Les Miserables” on the flute for her talent, and received advice from Dr. Reed Gratz, professor of music.

Since this was her second attempt for the title, Hazen felt she “was setting a goal” for herself.

Each woman had to write a platform on a topic she felt strongly about and that held importance. Hazen’s platform was on “Adolescent Mentoring.”

“This mentoring is helping an adolescent through junior high and high school,” Hazen said. In defining what role a mentor plays, she said, “It’s someone you look for, for guidance … like a role model.”

Although next year Hazen will not be eligible to compete for the Miss La Verne title, she does recognize the importance for others to pursue the pageant.

“We’re the future, right? They want us to be ready for the future,” she said.

Stanford has had prior experience in competing in pageants such as Miss La Verne. “I did the Miss Rancho Cucamonga, but it was just local, it wasn’t part of the Miss America pageant like this one,” she said.

Stanford received $300 in scholarship money for being runner-up and an additional $75 for selling the second most tickets to the event.

North spoke highly of Stanford, “She is a bouncy, lovely, young lady,” she said. “She is so full of life and is always smiling.”

“I think it also helped with the fear of dancing on stage,” she said. “I’ve never danced on a stage by myself,” she said, despite the fact that she has participated in various dance teams over the last six years.

Stanford’s platform was written on the “Importance of Education.” Her personal interview also consisted of judges questioning her opinion on the lack of funding toward education, school districts and other topics concerning schools.

North understands the importance of preparation when dealing with competitions such as these. Everything must be accounted for and thought over.

“We had a lot of fun with them for eight weeks,” she said. “They went through a type of boot camp with us.”

“Boot camp” covered everything to prepare them for their big night. “We deal with how to interview and handle any questions the judge’s may throw at you,” North said. “Also how to walk on stage correctly.

“We show the girls how not to be afraid to walk in front of 300 people in a bathing suit,” North said, with a serious tone, “Because that’s scary. We show them how to be natural.”

Stanford explained what that was like, “It was really quick, it wasn’t as bad as you’d think,” she said.

“They’re not even judging for the skinniest girl on stage or anything like that.

“They know that just because you’re skinny, doesn’t prove that you’re physically fit.”

After receiving the title of “Miss Photogenic” by judges and being compared to a “rose coming into full bloom” by North, one would assume that Sahagun would have no problem explaining her selection in the pageant.

“The lady that did my makeup said I looked like a white Vanessa Williams,” she said, laughing.

Like all other contestants, Sahagun received a $100 scholarship to help with any expenses.

Her primary interest when she entered the contest had to do with the scholarship.

“I saw on the flier that it offered scholarship money,” she said, about entering the contest.

Although this was her first pageant, she said she feels she will return next year.

“I just hope to go out there again and have as much fun as I did this time,” she said.

As for the selection process for Miss Photogenic, all the participants took photographs and a professional photographer selected the best one.

Hazen said what impressed photographers most about Sahagun was “her eyes, they’re really big.”

“I was so happy,” Sahagun said. “Getting something like this makes you feel more sure about yourself.”

Sahagun did a monologue from the play “Chapter Two” by Neil Simon for her talent portion of the contest. “I’ve never been into modeling, but I am into acting,” she said. Sahagun wrote her platform on “The Importance of Children’s Literacy.”

“Reading is the building block to learning,” she said. “And it seems like all kids do is watch TV.

“I felt that instead of picking up the remote control, kids.”

She also recommends that others participate in the Miss La Verne pageant next year. “It’s like that little girl dream of being Miss America,” she said. “This is almost the fulfillment of that dream.”

Miss America, formerly known as a “beauty” pageant, has focused itself on being a “scholarship” pageant, in hopes to help women pursue positive futures and the costs of higher learning.

This year it was hosted by the city, after North asked Mayor Jon Blickenstaff to put the proposal to fund the competition in front of the city’s council.

“It was a wonderful gesture by the city of La Verne,” North said. “We didn’t have to pay for the facility and that money went toward more scholarships.”

A particular sponsor does not provide the scholarship money itself. “We go out and drum the streets to receive any kind of scholarship money,” she said. “We get it from the local community businesses.

“Although, it hasn’t been easy getting the scholarship money,” she said, “I’m one of those Energizer Bunnies. I keep going and going!

“I hope that it gives [donators] a good, joyful feeling inside that they’ve helped a young woman go to college,” North said. “That you’ve helped a kid get an education.”