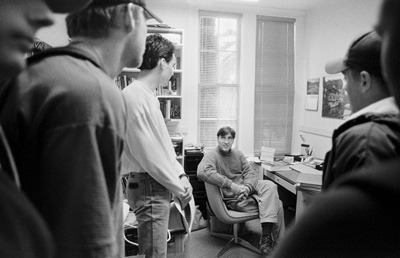 After dismissal of Spanish 100 and Spanish 101 teacher Paul Zarna on Tuesday afternoon, about eight of Zarna’s students gathered to protest the action. Freshmen Matt Mallon, Dustin Lorentz and Jarrod Hesler confronted Foreign Languages Department Chair Dr. Gerard Lavatori about the issue. Lavatori explained that no action could be taken, a new teacher would arrive by the next class meeting, and that he could not state the reasons behind Zarna’s firing. / photo by Matt Wright

Following the dismissal of part-time Spanish professor Paul Zarna early Tuesday afternoon, about eight students from his class gathered in protest to appeal the decision to Dr. Gerard Lavatori, chair of the Foreign Languages Department.

The students of Zarna’s Spanish 100 and Spanish 101 classes have since begun a petition process to express their disappointment. Their concerns centralized around Zarna’s dismissal in general, but also around the manner in which they said they were treated when they sought answers.

“We would like to know what happened,” said freshman Matthew Mallon, one of the students in the protest.

Dr. Lavatori regressed from answering the students’ questions and said, “I don’t know if I’m free to talk about all of that right now. The choice to fire Mr. Zarna was my decision.

“Something I’ve been thinking about for the past week or so.”

Freshman Dustin Lorentz, however, was not happy with the response. “We’re kind of awestruck by this. We’d like an explanation. We enjoy him as a teacher and we like him,” Lorentz said.

Dr. Lavatori said the matter arose when other students in the class approached him with a problem they had with Zarna. Though he would not comment on the situation any further, Dr. Lavatori repeated that he was “not free to talk at this point” and that part of the justification for the dismissal is confidential.

Dr. Gingrich, dean of the College of Arts and Sciences at the University, said that Zarna’s dismissal had to do with his classroom behavior and his relationship with colleagues.

However, Zarna said he was neither forewarned about, nor was he told of the reasoning behind his dismissal. He admitted to some conflicts between him and other colleagues late last week, but said his approach toward them was one mainly of constructive comment.

“I had no clue as to why he did it. Nothing happened between Friday and today that could give me an idea,” he said Tuesday in regards to Dr. Lavatori’s actions.

Zarna said he believes part of the matter may have encompassed a recent situation in which three of his students were asked to transfer to another class because of “their inappropriate conduct in the classroom.”

Zarna said he often warned the students of the actions he could take to resolve the problem, and that, after the students did not improve their conduct, Dr. Lavatori gave him permission to do what was necessary.

“I would ask them to leave my classroom and they would not leave,” said Zarna. “He [Dr. Lavatori] was on it. He suggested that I separate them.”

In a five-page letter to Dr. Gingrich, Zarna explained how he dealt with the individuals in question. The letter, dated March 14, also included Zarna’s comment on his students’ outstanding performance and about some disagreement between he and Dr. Lavatori in regards to his teaching tactics.

Zarna wrote, “I stated to him that in all probability that class which he [Dr. Lavatori] did observe is the best he has ever seen in his life.”

Apparently, Zarna said, Dr. Lavatori made some comments about his teaching style, and Zarna was displeased with his remarks. “For me to teach the way he suggests means to fail the students, which I consider very unprofessional and unethical,” the letter said.

“He was very laid back and he had fun just like us,” said freshman Jarrod Hesler in regards to Zarna’s teaching techniques. “He kept going over and over the stuff until we learned it.”

In his letter, Zarna also stated that there is “too much unhappiness and lack of accountability” within the department and asked if Dr. Gingrich would be willing to look over such matters. Zarna made several suggestions in the letter, including the fact that he was concerned with the department as a whole, as well as its students. Zarna also invited Dr. Gingrich to visit his classroom to witness what his teaching style encompasses.

Aside from these statements, Dr. Gingrich said that such issues were part of the reason for which Zarna was dismissed. The primary reason, however, was due to a lack of professionalism with the other staff members on Zarna’s behalf.

However, Dr. Gingrich did not believe the conflicts would erupt so quickly, and said he had arranged to visit one of Zarna’s classes yesterday. When the situation grew worse, there was a need for an immediate decision.

“The department chair and I came to a mutual decision about that,” Dr. Gingrich said, adding that his own reasoning for the decision was “because [of] unacceptable behavior with his colleagues and unquestionable behavior with regard to the students.

“I don’t know that I want to spell it out,” he said when asked to specify such problems. “I think it had to do with students tangentially, but not primarily.”

“Acceptable would be professional behavior with colleagues, rational reasoning with colleagues, and being able to control his temper,” said Dr. Gingrich, admitting that he did not know Zarna well.

“I wasn’t aware of any problems of others with me,” Zarna said. “Why was I dismissed? What does that have to do with anything? You have to do something to be dismissed, especially without any warning.”

For the time being, Dr. Lavatori assured students that, because of the circumstances, Zarna will not be reinstated as a professor of the University. He also said that a replacement for Zarna’s classes will be sought by the next class meeting.

But at yesterday’s Spanish 100 class, Dr. Lavatori informed students of the situation and cancelled class for the remainder of the period.

Hesler, one of the students in the class who also took part in the protest, still did not understand the reasoning behind the action. “I never really suspected any problems. He acted the same way the whole time.”