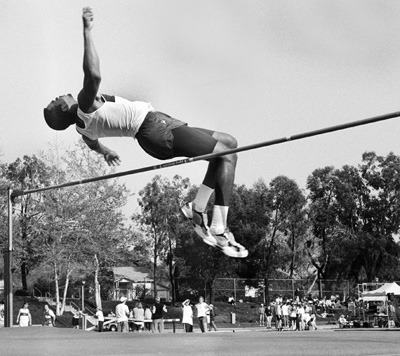 Sophomore Andre Ike cleared 6’7″ at the SCIAC Track Quad meet Monday. Out of 10 competitors, including two others from ULV, Ike placed second overall. ULV, as a team, was defeated by all three schools – Pomona-Pitzer, Cal Lutheran and Redlands. / photo by Laura Ambriz

“The depth has just killed us this year,” said head coach Pat Widolff. “There’s just so many events where we don’t have entries.”

Senior Eboni White led the women with two first place finishes. Her top throw in the discus of 41.70 meters was good enough to provisionally qualify for Nationals. She also placed first in the shot put with a mark of 11.59m.

Another top finisher for the women was freshman Dianne Williams. Her throw of 36.30m in the javelin gave her first place in the event as she also provisionally qualified for Nationals.

The only first-place finisher for the men was sophomore Brandon Jones, who jumped 6.71m. Sophomore Ryan Travaille finished third in the same event.

The men’s team also fared well in the field events.

Travaille’s second place finish in the javelin prevented a Cal Lu sweep of the top three places in the event. His throw of 173 feet, three inches was one inch further than the Kingsmen’s Keith Parris.

Junior Mike Miyamoto was third in the pole vault for the Leopards with a mark of 10 feet. Myers just missed third place in the discus. His mark of 42.22m was just two centimeters behind Cal Lu’s Art Miller and the Kingsmen took the top three places in the event.

Jones placed second in the men’s 100-meter dash in 11.25 seconds. Senior Roman Holston finished fourth in 11.47, seven-hundredths of a second behind the third place runner.

The men’s 4×100 relay edged Pomona-Pitzer’s by one one-hundredth of a second to take second place in 43.74.

Sophomore Andre Ike placed second in the high jump with a mark of 6’9. He just missed qualifying for nationals, provisionally.

In the women’s sprints, freshman Akilah Nyerere placed second in the 200 in 28.70 for La Verne. The Leopards had no participants in the 100 or 400.

The middle distances were a major stumbling block for the Leopards.

In all, there were 11 events in which ULV had no participants, seven of which were women’s.