By Chris Peterson, Summer Herndon on April 30, 1999 in Baseball, Sports 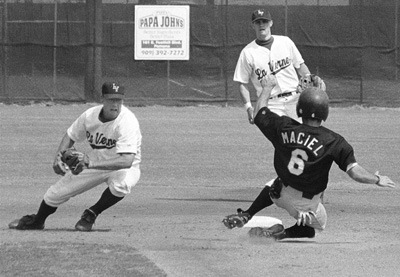 Southern California Intercollegiate Athletic Conference (SCIAC) action ended for the University of La Verne’s baseball team last weekend as it won two out of three games against Pomona-Pitzer to capture a share of second place.

Whittier and Claremont-Mudd-Scripps tied the La Verne for the spot with a 14-7 record. Cal Lutheran took honors as the conference champion with a 17-4 record. ULV finished 25-14 overall.

Saturday’s double-header started off with a Pomona-Pitzer redemption. The Sagehens answered their Friday defeat with a 13-4 victory of their own.

“We had a little bit of a let down Saturday morning. I think we took them for granted after winning Friday’s game,” said senior infielder David Riffle.

However, the Leopards returned to Earth over lunch, and game two of the doubleheader was all La Verne.

Riehl thumped two more homers and scored five runs on four hits for five RBI in the final game of the doubleheader Saturday.

Junior pitcher Ryan Christoph posted his seventh win of the season with nine strikeouts in eight innings pitched. Junior Keith Freeman faced five batters in the ninth inning and stuck out three en route to a save.

La Verne was led by Riehl, who hit four home runs on the weekend.

La Verne faced off against Chapman University on Wednesday for its final game of the season.

The team lost to Chapman, 12-5, at Ben Hines Field. Down 12-1 in the eighth inning, Riehl displayed his hitting power once again with a grand slam in his last college at bat. He ended the day 1-for-4.

The Panthers had 17 hits off four pitchers. Chapman pitcher Erik Maurer gave up only one run on five hits in the six innings he pitched.

“This season we’re a lot better. Coach Lee did a good job of getting new faces out here. There’s a lot of good characters out here this year,” said Riffle.

“There’s a lot of discipline on the team. That comes from his will to win. ”

Riehl, who transferred in from Portland State this year finished off his senior season in style.

“I wanted to come to California and play in the sun,” said Riehl.

Riehl finishes the season with 15 home runs, 72 RBI and a .412 batting average. His 15 home runs was the highest in the conference.

“Stats are something I don’t look at until the season is over, but I think I did well. At times, I feel like I could have done more,” he said.

According to Lee, Riehl is the kind of guy “that exemplifies what we’re looking for on the team. The type of season he’s had is indicative of the kind of person he is. He puts the team and his teammates first.

“When you see him hit a ball out into the middle of D street, he watches it go out, takes a couple of steps, drops his head and runs the bases. He doesn’t try to show anybody up, and that’s a good example of what he’s about. I’d love to have him back again,” Lee said.

Riffle also closed out his career at La Verne on Tuesday.

“It had its ups and downs. When I came to La Verne we were coming off of a World Series Championship season. We kind of went down for a couple of years, but now we’re back to where we were,” Riffle said.

For Lee, this season proved to be a growing process. In his first season at ULV, he took the program upward and, along with the hard work of his players, created a winning season.

“The main thing we’ve done as a coaching staff is to drive home the fundamentals,” said Lee. “I’m not the kind of coach that’s going to allow someone to keep doing something wrong. I’m going to step up and tell them right away. I think we’ve made the transition into being a very teaching and process oriented team.

“When you try to make changes, a lot of people will combat it. But if you look from January to where we are now, we’ve progressed and we’ve done some good things.

“I think when the players realized what we’re trying to accomplish, they bought into it and they enjoyed it.”

GLBSU works to resurrect presence
Students really do not care