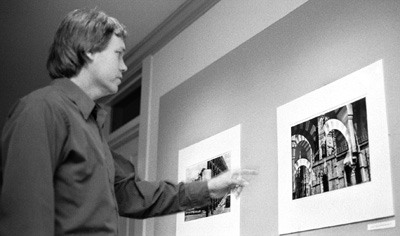 Michael Ryan, adjunct professor of music, observes a photograph of Cordoba, Portugal hanging in the Irene Carlson Gallery. The Gallery now has on display selections from Harry Wilson entitled “Chance Documents.” They will be on display through May 21. Wilson will lecture on his work on May 6 at 7:00 p.m. in La Fetra Auditorium. / photo by Juan Garcia

Harry Wilson was a traveler. He has seen the likes of Poland, Nicaragua, Spain, Czechoslovakia and China. Beautiful countries that are reflected in Wilson’s collection of photographs that are currently on display in the Irene Carlson Gallery.

His collection of 25 images are large double exposures in accordance with “socially-concerned and visually intelligent.” They present “diverse traditions and historical experiences which have made the history of that region so tragic.”

It cannot be said much better than that.

What is meant by double exposures is that more than one image is portrayed in the photograph. For instance, there is a photo of the ruins of Managua Cathedral in Nicaragua that is overlapped with a image of the Virgin Mary, revealing both the cathedral and Virgin Mary.

Wilson is trying, rather he is succeeding in relaying subtle messages about the nature of the historical life in Eastern Europe.

His photos are very thought provoking and invite the viewer to delve deeper in to the image to not only distinguish the differences, but also to extract the emotion and meaning.

According to the statement by Shelley Stone, the collection that is displayed is a “new and poetic kind of documentary.”

At 7 p.m. on May 6, Wilson will be on giving his lecture regarding his collection. The lecture will take place in La Fetra Auditorium and admission is free. A reception will follow the lecture. The show will be on display through May 21.

Extracurricular musician does it all
GLBSU works to resurrect presence