By Enrique Gutiérrez, Laura Ambriz on April 30, 1999 in News 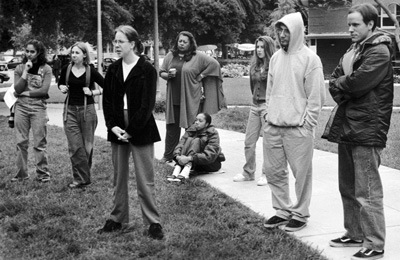 “Justice for Mumia” was the reason for an FTC (Floor Two Crew) and Students for a Free Tibet-sponsored demonstration last Friday. Mumia Abu-Jamal has been rallied by thousands who want to see him saved from the death penalty. Students Anna Roy, Kristine Werthwien, Valancy Rasmussen, Harvel Lewis, Darla Franklin, Stacey Mleczko, Eddie Casarez and Tyson Dusch were some of the participants in the walkout. / photo by Laura Ambriz

Approximately 20 University of La Verne people attended the walk out on campus to show support for Mumia Abu-Jamal and inform people about the situation he is undergoing.

ULV professors and students expressed their thoughts on the situation as they met for the walk out at the Rock last Thursday.

“Our criminal justice system has been racist from the very beginning,” said Dr. Deborah Burris-Kitchen, professor of sociology.

Abu-Jamal, an African-American radio journalist and former Black Panther Party member, was convicted of killing police officer Daniel Faulkner. He has been on death row for the last 17 years, and Pennsylvania Governor Thomas Ridge may soon sign a death warrant for Abu-Jamal’s execution.

However, it has never been proven that Abu-Jamal is actually responsible for this crime. In fact, many believe that what is happening to Abu-Jamal is the result of his political beliefs.

“What happened with Mumia had to do a lot with racism. Especially as African Americans, we need to support him,” said junior David Edmond. Edmond is a member of Floor Two Crew (FTC), a group formed by ULV students which performed during the protest.

Abu-Jamal worked as a part-time cab driver. On the night of Dec. 9, 1981, he says he saw his brother, William Cook, being pulled over by police.

No one knows exactly what happened during the incident, but Abu-Jamal ended up in a hospital with a bullet wound to his stomach.

The plea for an appeal for Abu-Jamal is loud and represents a massive request for the abolition of the death penalty.

Nevertheless, on Oct. 29, 1998, the Pennsylvania Supreme Court denied Abu-Jamal the opportunity of a new trial.

“I’m supporting Mumia because he had a totally unfair trial,” said freshman Anna Roy, one of the walk out organizers.

Abu-Jamal’s execution was scheduled for Aug. 17, 1995, but the case attracted international attention, and a court order stopped the execution.

“In the United States we have continuously used the death penalty as a tool against poor people, against people of color,” said Associate Professor of English David Werner.

“We abuse the law to lock up poor people, and people of color, and to make sure they never fight back and never ask for the things that have been stolen from them-their rights, their land, their humanity, their dignity … everything,” Dr. Burris-Kitchen said.

Abu-Jamal legally owned gun, but it was a .38 caliber. The bullets found in Faulkner’s body were .44 caliber.

“It is also worthwhile remembering that the judge in the Mumia case was a member of the Policemen’s Brotherhood Union and should have excused himself from being a judge in the case,” Werner said.

Professor Werner’s message focused on stopping the death penalty. “We are executing people now in the United States at a rate of about 10 to 12 a month and that rate is going up,” he said. “The death penalty is being used and it’s got to be stopped.”

Werner explained that both the Soviet Union and South Africa got rid of the death penalty when they reformed.

“They saw it as an instrument used by the state to repress and suppress minority and divergent points of view,” he said.

“We need to start having more protests like this,” said Dr. Burris-Kitchen, as she called for society to wake up. “People are going to start to realize what’s really happening is that we are controlling a mass population of people who do not have access to means to survive.”

She also said that it was an irony when President Bill Clinton addressed the nation, saying that it is important to teach American youth alternatives to violence “while we’re bombing Belgrade. That speaks so strongly of what our nation is about,” she said.

“Our country was founded on violence, and violence does not stop violence,” she added.

Senior Eddie Casarez also participated in the event and encouraged people to do research on their own.

“Research the information and let that evidence speak by itself. It has never been a real democracy in this country,” Casarez said. “Those who had the money and power have been those who have ruled.

Meanwhile, Roy warned that “this could be our last opportunity to send a clear, structured, pro-justice, anti-death penalty message to the state government, the justice department and the White House.”

The walk out ended as professor Werner said once more, in a demanding manner, “Free Mumia now.”