By Enrique Gutiérrez, Ian Gratz on May 7, 1999 in Sports, Volleyball 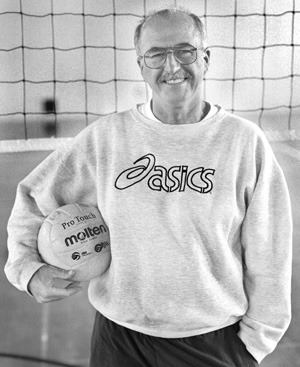 Jack Coberly took over the La Verne men’s volleyball program two years ago. In that short time, he has lead the team to a second place performance in ’98 and a championship in ’99. In addition to coaching, Coberly works as a massage therapist at the Claremont Club and also worked with the USA National Men’s Volleyball Team during the ’80s. / photo by Ian Gratz

Head coach Jack Coberly has not been around for long, yet, he has brought his knowledge to lead the University of La Verne men’s volleyball team to a national runner-up and a national championship in only two seasons.

Still, he refuses to take the credit and prefers to share it with everybody else.

“No program succeeds with a single person. The athletic director has to support you, the coaching staff is important,” said Coberly.

“You can’t run a program unless you have that sort of support,” he said.

The truth is that, since the arrival of Coberly at ULV, the men’s team has been transformed, gaining national recognition and respect.

“Anytime there is a change, people tend to look at things in a fresh way,” he said.

Coberly was the missing element that the team needed. After a 3-23 record in 1997, the Leopards turned things around under the direction of Coberly to finish 12-12 and 12-11 in the last two seasons.

“We had a lot of talent before he got here but had a hard time blending the talent together,” said Coberly’s son, Morgan, who played two years for La Verne and is currently an assistant coach for the Leopards.

“He is a player’s coach. He knows when to do the right thing,” said Morgan.

Nevertheless, Jack insists it was not him, but rather the players who really made the change.

To Coberly, the key of their success relies on getting focused on a common goal.

“It was just a matter of getting everybody pointed in the right direction, developing a common vision,” he said.

“I really believe in developing team goals and developing a common vision as a team and as a coach.”

“Fortunately for me, the guys trusted me enough, possibly because I was older, that we were able to come together as a team,” he said.

The experience accumulated throughout the years has made Coberly a wise coach. His ability to adapt to a situation may have helped him in reconstructing the program at ULV.

“Everybody gets along with him,” said senior co-captain Sean Douglas. “Everybody respects him and the way he coaches. We have the same goals. There are no egos on our team.”

“He is very knowledgeable as a coach,” said freshman setter Clint Weiler. “He understands the game of volleyball, both mentally and physically. He knows how to get the team prepared mentally.”

Coberly has coached for about three decades, with experience ranging from coaching little kids to adults.

“I coached little tiny kids and adult teams in the adult national championships. I also coached high school volleyball and was assistant coach for a couple of state universities in the early 1970s,” Jack said.

Coberly was born in Monterey Park, and he attended Alhambra High School. He then went to Orange Coast College for about a year. However, he did not play organized volleyball at either school.

Coberly was introduced to organized volleyball in 1964 at the U.S. Air Force as he served during the Vietnam War.

“We had three Olympians on that team. The setter for the team that I originally played on, Pete Velasco, was the 1964 Olympic setter and basically the guy that taught me how to play,” Coberly said.

He did not go back to college until he was 27 years old. He attended Humboldt State University, where he got his bachelor’s degree in art.

But his goal was to coach Division I college volleyball. For that reason, he moved from Eureka, Calif., to Colorado in 1978.

“Originally, I moved to Colorado to do graduate work so that I could coach Division I volleyball.

“I kind of got burned out and I wanted to work for myself, so I went into massage therapy,” he said.

His involvement in volleyball never ceased, and he continued as a massage therapist.

“I traveled a lot with national teams,” said Coberly. “I’ve been to the world club team championships in Japan, and I did the Cuban and Russian tour with our ’88 Olympic men’s team as a massage therapist.”

He also coached a junior boys team in Colorado for 12 years and took the Boulder High School boys’ volleyball team to its first ever state championship.

But he did not stop there.

“I usually play in the adult national championships every year. I played for the U.S. Senior men’s team at the World Masters Games in Australia about four years ago. I got a silver medal there,” he said.

But his goal of coaching at the college level was still alive.

The way he ended up as the Leopards head coach was unexpected.

It was during the 1997 season that he came to see a Leopard’s game at UCLA.

“I came out to see Morgan play and Don’s [Flora, the former head coach] assistant coach could not make the game, so he asked me if I wanted to sit on the bench and take stats,” Coberly said.

“I was just hooked. I wanted to coach intercollegiate again. It was just like, I belong there. It felt really good,” he said.

Coberly took over the team the following season, after Flora resigned.

By returning to California, Coberly had to separate from his 17-year old daughter, Andra, who lives in Colorado.

“In the process of having kids and changing occupations you get away from your goals, so coming to La Verne was really a full circle for me. All of a sudden it seemed to fit. It felt like it was the right thing to do,” Coberly said.

“I think I was probably the first coach for the men’s program in a long time that hadn’t been connected with La Verne. I didn’t graduate from here. I didn’t play here,” Coberly said.

“So I came in kind of looking not from an aspect of tradition and what’s been done, but just how things needed to be done.”

Now that he has led his team to the top of the national rankings, he wants to keep improving the program.

“We’re not trying to build a dynasty, this is an academic school. We want good student athletes,” he said.

“We want to continue to improve the image of volleyball at La Verne with other schools.

“What I would like to see, instead of players coming to our program for a year or two and then leaving to go play in D-I, that we have D-I players that maybe aren’t getting enough playing time, not be afraid to come to us,” Coberly said. “That would be our battle to improve the perception of D III volleyball in general.

“We’d like to see more D III colleges out here on the West Coast. Right now, the only two [UCSD and UCSC] we have are many times bigger than we are.

“We would like to have our conference. It has to be a major goal,” he said.

In the meantime, he will continue to work as a massage therapist at the Claremont Club and get everything ready for next season.

“My dad has been a good leader,” said Morgan Coberly, “he stresses coaching life as much as volleyball.”