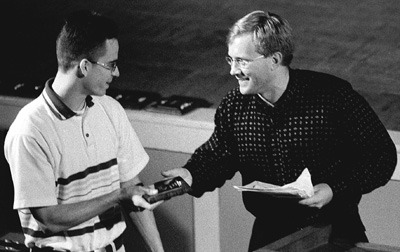 The Academic Awards ceremony, held Tuesday, May 4, honored many students who have shown outstanding performance in their respective fields at the University of La Verne. A total of 79 awards were given throughout the night. Junior Rick Garcia, a philosophy major, was presented with the humanities award for Religion and Philosophy by the chair of the Religion and Philosophy Department, Dr. Jonathan Reed. / photo by Matt Wright

This year at the annual Awards Night, students were acknowledged by different departments for their determination and accomplishments.

A total of 79 awards were given to students from various departments, and other students were recognized by Who’s Who Among American Colleges.

The night began with Dr. Cook welcoming attendants to the ceremony. He then spoke to students in the audience.

“Old people like me like to give advice,” Dr. Cook said. He gave tidbits of advice regarding youth and life in general. Soon after, the distribution of the awards followed.

The department of education gave three awards to students from the fields of diversified and child development. Students recognized were Jessica Hunter, Dana Moyer and Ruth Rutte.

The Modern Language Department awarded three students from the fields of English as a second language, French and Spanish. The students who were honored include Yuko Tanaka, Dominik Przybylski and Kenia Magallanes.

The Honors Program acknowledged Roxanne Klein and Anthony Loriso, two students from the field of honors academic excellence, and a “Tutor of the Year” award was presented to Hoang-Quyen Nguyen by Lynn Stanton-Riggs.