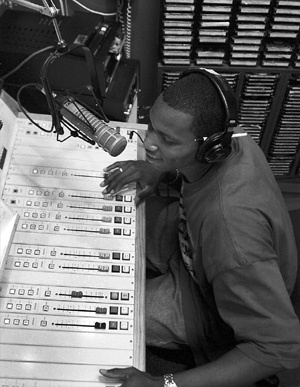 Junior Ahmad Rasshan, one KULV’s disc jockeys, can be heard in only certain areas of the campus. Following student votes, ASF awarded KULV $7,300 for FM transmitters for Stu-Han, Davenport Dining Hall, and the Student Center. / photo by Erica Paal

An attempt to fund the future expansion of KULV proved successful when University of La Verne students and the Associated Students Federation (ASF) Forum voted in support of the request made to the Forum by KULV staff members.

KULV presented a proposal written by senior Simon Bouie, a broadcasting major, to the Forum. The proposal was in regards to the purchase of an FM transmitter, its benefits and the actual financial figures needed to complete such a project.

The project was structured in two phases. Phase I consisted of equipping the Oaks and Brandt residence halls with FM transmitters during the spring semester of 1998. ASF funded the costs to complete Phase I of the project, enabling for a greater clarity value in both residence halls.

Phase II of the project, which was scheduled for completion this year, consisted of purchasing FM transmitters that would improve overall sound quality and access to the radio station on that signal from Stu-Han Residence Hall, Student Center and Davenport Dining Hall.

KULV requested a total of $10,000 to complete Phase II of the project.

Station members argued that, by funding the purchase of the transmitters, many benefits would be supplied to the University. In the proposal made to ASF, many of the key benefits included a clear signal and an expected increase in listenership and student participation due to the expanded audience.

A point was also made regarding the disc jockeys (DJs) who are currently on the radio. The proposal stressed that, with the awareness of having a larger audience, many DJs would strive to become more professional in quality in order to assure the best radio product to the listeners.

The proposal was put on the ballot as an advisory vote for the student election April 22-23, meaning that the vote represented what the student body wanted or suggested ASF to do. The final vote clearly showed that the funding required to complete this project was widely supported by students. On April 28, however, the Forum voted 6-4 to allocate $7,300 to KULV.

The transmitters, which are expected to last 20 years, allows this investment to average out roughly to $365 a year for the next 20 years. Bouie, who took on the project when, two years, he began wondering why KULV only ran on an AM signal, said, “I tried to stress to them [ASF] that you guys aren’t giving us $7,300 for a ‘Free Day of Fun’ or some kind of event like that, you’re basically making an investment in the University. It’s going to affect generations of students … that to me is a great legacy for them to do.”

Shane Rodrigues, radio and television assistant, assisted Bouie in determining what strategies would be necessary to accomplish the project.

“KULV entertains, provides information, provides news, sporting events all in a timely manner,” Rodrigues said as to why KULV needed the FM transmitters. “It’ll benefit the students to have the radio station on an FM [signal] because it increases listenership and participation in school activities and gets the information out.”

He said that Bouie was the individual mostly responsible for the completion of the project. Bouie, on the other hand, recognized several Communications Department members for their help.

“Shane and Mike [Laponis, associate professor of communications], and George Keeler [Communications Department chair] have all been very helpful. I have had a lot of help from people inside the department,” Bouie said.

“But as a student-advocate voice, I really didn’t need any help. I knew what it took to get the project done, and it was my baby, so I didn’t expect people to jump up and help me do it,” he said.

The installation of FM transmitters is scheduled for completion this summer, and students should expect to hear a clearer version of KULV in the fall.

Bouie, who is graduating this month, said, “This was something I set out to do, and my goal from day one was to make sure that the project was done before I graduated. I think that now that we have the money, I know that the installation will go up this summer, and I feel that I’ve accomplished what I intended to do.

“I wanted to give something back to the University. I think I can say with clear conscience that I helped orchestrate something that will help benefit this place for a long time, and I’m proud of that — very proud of that.”

Hockey class approved for fall 1999 semester
Letter to the Editor