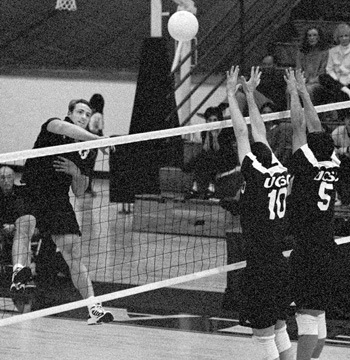 Coach Jack Coberly anticipates the action of his team captain, senior Sean Douglas, as he hits over the outstretched arms of UCSC defenders Johan Carson and Kevin Fujinaga. Douglas has hit over .300 in the Leopards last two games, helping La Verne to a 5-6 record. / photo by Ian Gratz

With those two crucial matches on tap, head coach Jack Coberly decided his team needed to be reminded that much work was necessary if it wished to duplicate the accomplishments of the 1998 squad.

“They’d been dwelling too much on last year,” Coberly said, referring to the 1998 Invitational Championships at Springfield College, in which La Verne was runner-up to Juniata College.

In order to help his team regain focus, Coberly removed anything that might cause overconfidence or an inflated sense of self-worth.

The 1998 NCAA Division III Men’s Invitational Volleyball Championship Runner-up trophy was temporarily stashed away and recent early-season national rankings were removed from their place of display in the window of the coach’s office. With a tough week of preparation and focus on team effort, La Verne was ready to take on all-comers.

The first opponent for the sixth-ranked Leopards was UC Santa Cruz, ranked eighth in recent polls.

La Verne shook off the rust of recent performances, while solving many of the problems that had plagued the team of late, and defeated the Banana Slugs of UCSC in the Supertents.

Sophomore utility player Alex Lienert had 19 kills for the Leopards and was the only player on the team to reach double figures in kills. Senior outside hitter Jeff Pang contributed eight kills and junior outside hitter Dave Spegon had five kills and seven defensive digs.

Leading 6-4 in the first game against Santa Cruz, La Verne reeled off four straight points to take a commanding 10-4 lead and control of the game, which it won handily. ULV built a quick 4-1 advantage to start the game and did not relinquish its lead the rest of the game. They held the Banana Slugs to a zero percent team attack.

Similarly, La Verne held a 7-5 advantage in the second game before recording six unanswered points. The third game was knotted at five, but the team came together and pulled out a victory.

“We played as a team, and that was one of our major goals,” said Coberly.

With La Verne playing host to the third-ranked UC San Diego Tritons on Saturday, the coach was able to give some of the regulars much needed rest as well as provide playing time for many of the freshmen in the match against UCSC.

The rest paid off, and La Verne notched another win on this important weekend with an impressive performance as ULV played one of its best matches of the season.

Coberly said the two victories were “huge,” seeing as how seedings in the national championships are based on the rankings.

“Energetically, mentally, it’s a plus for us,” he said. “Some coaches haven’t even voted us in the top 10. This was a good win for us. We just have to keep this run going.”

Lienert again came up big for the Leopards in the match against San Diego. He had a match-high 24 kills. Junior utility player Luis Cruz contributed 14 kills for La Verne.

“He had a great night,” said Coberly of Lienert. “He had a lot of leadership and he kept the balls in play.” And when La Verne began to show signs of fatigue in the third game, Lienert “came back with some big hits.”

Senior utility player and team captain Sean Douglas, who had 10 kills, kept the team focused when it began to falter.

“By sheer will alone [he] was demanding everybody get up and do well,” said Coberly.

Against San Diego, ULV doubled its block total from the UCSC match, something they had been working on.

“We served tough, they passed great and we were still able to initiate and get blocks tonight,” Coberly said. “So all of our blocking work is finally paying off.”

ULV had seven total blocks, while keeping its attack errors to half that of the Tritons.

In the third game against UCSD, La Verne held an 11-4 advantage, but then began to play sloppy. This enabled San Diego to come back and tie the game at 12.

The Leopards then scored three straight points, including a key block by sophomore middle blocker Jason Kolodge, to win the match.

Despite a vociferous, hostile “home” crowd, of which at least half favored UCSD, La Verne beat San Diego in three games to complete a six-game sweep over the weekend and improve its record to 5-6.

The Leopards also had to deal with the loss of one of the team’s leaders and best players. Senior outside hitter Chris Peterson is lost for at least the majority of the season after breaking bones in his right hand after La Verne’s loss to UC Irvine on Feb. 20.

Peterson had 24 kills in a losing effort against Cal State Northridge on Feb. 19, a measure of his importance to the team. Coberly said he has maintained his role as a leader on the team, despite being relegated to the bench in an assistant coach type role.

La Verne, in the midst of an eight-match home stand, plays its next match tonight against Mercyhurst College of Pennsylvania at 7 in the Supertents.

The match against Mercyhurst is the fourth in the team’s current series of home matches, a streak in which ULV hosts teams from Illinois, Missouri and New Jersey.