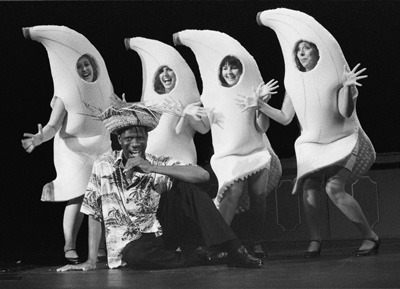 A smorgasbord of movie characters and entertainers were rejuvenated on stage at “The Variety Show Deux,” directed by Jennifer Cantwell and Bob Show, presented by the Brickhouse Theatre Company last weekend.

The comedy-motivated play provided good clean fun, although the show would have been hilarious with a sprinkling of nuttiness.

What better way to start the play than have Dr. Med “Evil” battle it out with Dark Hole in the prologue. They pranced around with their light sabers then broke out into disco frenzy. The whole opening was a sure attention-getter, for what better way to captivate the audience than to bring together two popular characters?

With the audience in full concentration, the set was unveiled to reveal a live band and a talk show setting. The whole concept of the play was to make it simulate a talk show that was hosting a talent competition. The host was Jerry Clueless, modeled to create an annoying combination of Jerry Springer and Jerry Lewis.

Each group of performers was given the opportunity to entertain the panel and the audience to score points, but it also faced the potential of being “gong’ed out” by the judges if its performance did not please them.

The first act featured a “clean” version of the song, “Party like it’s 1999” modeled after the song by the Artist Formerly Known as Prince. Then a lament about the pains of aging followed with five flavors of “spice” singing “Wannabe,” while five actresses portrayed themselves as the Old Spice Girls.

The show represented the entire food chain, everything from dancing bananas to vegetables, to mystery men decked out as chickens, to the singing of Sandler’s “Lunch Lady Land” song.

There was also an attempt by the three judges to pollute the show as each took turns to somehow be represented. The Waterboy attempted to pass as a contestant and sang the “Lunch Lady Land” song. Judge Judy had a team of dancing Judge Judys. Even Clueless and Chewbacca had a chance to display their talent with a dance number.

The show was well organized except for the number with the pirates who performed the song “We don’t do anything.” It was too long and repetitive and the fact they just sat around looking bored did not help. But, overall the show did a good job of representing various aspects of life.

Since the Brickhouse Theatre Company was created to provide artists the opportunity to display their talents in a safe environment, and is influenced by the New Life Church, it provided clean and amusing family entertainment, which ensured that their shows can be attended by children.

However, the writers were a bit too paranoid as to the definition of family entertainment. Through changing the lyrics of some of the songs and making “clean” jokes the show lost some of its overall charm.