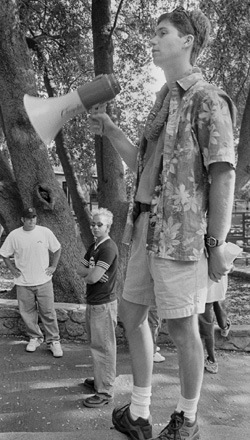 New to La Verne is Coordinator of Campus Activities and Commuter Programs Michael Houdyshell. Houdyshell comes to ULV from Sierra Nevada College in Lake Tahoe, where he held a similar position. His duties include co-adviser to ASF, Greek adviser and Orientation Week Coordinator. Here, he directs students during Orientation Weekend at Pilgrim Pines. / photo by Isela Peña

Michael Houdyshell replaced Melissa Jaunal as the coordinator of campus activities and commuter programs at the University of La Verne.

He began his first day of work at ULV in July. “It was pretty stressful at the beginning, but it’s a lot better now,” he said.

Houdyshell said his experience in advising student activities, orientation and student government at Sierra Nevada College assisted him in attaining the job at ULV. He applies his college experience to his job responsibilities, which include student programming, commuter activities and being co-adviser for the Associated Students Federation (ASF) Forum.

During college, Houdyshell was an active member of Alpha Kappa Psi and intramurals. He also served as an ambassador for Boise State University where he obtained his bachelor’s in business in 1993.

The adviser for the ambassador program in which Houdyshell participated in was Gertie Arnold. He said that she is the person who influenced him most in his life.

“She pointed me in the right direction,” Houdyshell said. He then went on to receive his master’s in education at Western Washington University.

Having a father in the military, who was often stationed on various locations, Houdyshell lived in many places and he says that he has become an experienced traveler. About every three years his father would be stationed in a new area and the entire family would relocate. The longest period of time that Houdyshell ever stayed in one place was while attending college in Idaho. He stayed there for seven years.

“If I had a lot of money I would spend all my time traveling,” Houdyshell said.

While he was in New Orleans, Houdyshell attended the National Association of Student Personnel Administrators convention and there he learned about the job opening at ULV. During the convention he was interviewed by Theresa Lopez, director of career development, and Laura Venturini, assistant director of career development, they were there representing ULV.

Lopez said, “Having done a wide variety of student activities, he brings a lot of experience. He is enthusiastic and friendly, he makes a good match with the students.”

Sophomore Erica Borbon agreed with Lopez, “I like working with him, he’s really laid back. You can talk to him about anything.”

At the time of the convention Houdyshell was looking for some permanence in his life and he said that he found it here at ULV. “I see a real sense of community it’s great,” he said.

With his first task of orientation being completed, Houdyshell is planning Homecoming, as well as expanding commuter programs. As time continues he plans to establish a variety of programs for the increasing student population.

“He’s into getting things done. He makes us work and wants everyone to get involved with school activities,” said sophomore Kim Schrepfer, who works at the Student Center desk.