By Erica Paal, Julia Carachure on October 8, 1999 in News 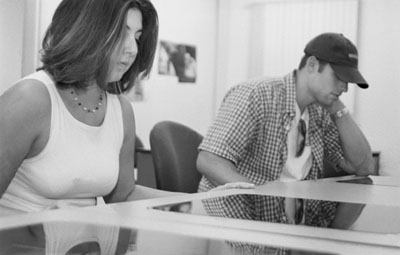 Sophomore Summer Hammons and senior Sean Douglas make use of the new computers in the AAIC computer lab, Room 130. Remodeling began last July and was completed Wednesday. Changes in the lab include the addition of 24 new computers that are stationed under glass desk tops. The design makes them more ergonomic. The lab also included the addition of new furniture and floors. / photo by Erica Paal

The Academic Computing Department at the University of La Verne has recently remodeled and updated the computer science lab located at the AAIC Building.

The lab now features 19-inch computer screens, as well as Zip drives and CD drives. They are in the process of adding headphone extensions so when students want to bring their CDs, they can plug in their headphones from the front of the computer instead of plugging it in from the back.

The computer and the keyboard are all located under the desk. A glass window on top of the desk gives students a view of the computer screen.

“When someone comes in, all they see are empty desks. We just want everyone to know that they are computers beneath those desks,” said Brian Tresner, computer lab and network supervisor.

“It’s more hi-tech. I like the desks and chairs, there’s more room in this lab,” said junior Erin Parsons.

Junior Manny Escalante, who often uses the computer labs, said, “I like the new look, but I think that if I had a lengthy essay that I had to do, I will probably wind up with a headache after a while.”

“Buying equipment and not planning for its replacement is a serious problem in many institutions,” Jay Jones, director of academic computing, said.

Academic computing has a three-year replacement plan. It is “vital to update the teaching labs,” said Dr. Jones.

“Computer science majors will be able to be leaders in the community. They were working with Pentium I machines that were limited in functionality and applications that we’re utilizing will help them to be better in the industry,” he said. “We are just making sure we have the proper resources. Give the students an excellent education and be useful members of society.”