By Campus Times Editorial Board, Isela Peña on October 29, 1999 in Editorials, Opinions 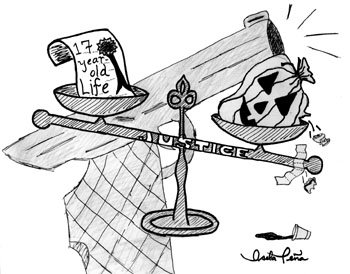 Imagine you are at home. It is 2 a.m. and you are sound asleep. Suddenly, you awake to the sight of a shadowy figure clutching a knife, looming near the foot of your bed.

He is rummaging through your valuables. You grab the gun in the drawer next to your bed and, as the intruder turns toward you, you pull the trigger, dropping him dead to the floor.

In most cases like this in our society, you would probably not even be charged with a crime. An intruder entered your home, your life was threatened and you acted in self defense.

But for some people, it is unclear where the line is drawn concerning the use of deadly force.

On the night of Monday, Oct. 18, the life of Brandon Ketsdever, a 17-year-old boy, was taken when he was shot in the head after he and two friends stole Halloween decorations from the Buena Park home of Peter Solomona.

According to Ketsdever’s friend, Frank Nelson, Solomona came up to the car in which the boys were sitting and fired his .357 Magnum at Ketsdever’s head from point-blank range, before being restrained by his wife and daughter.

Solomona was not protecting himself or his family. He was not even attempting to prevent the theft of his car. He shot and killed a boy because the boy and his friends stole an orange trash bag with a jack-o’-lantern face on it.

Sure, the three teenagers acted foolishly when they decided to continue what they considered a regular ritual of stealing holiday decorations as a gag. But Solomona simply went too far, even if, as he claims, the gun went off accidentally. There was no reason to be carrying a gun in the first place.

According to the Orange County District Attorney’s Office, Solomona was informed by neighbors that the boys had stolen the decoration and he drove around the neighborhood searching for them. Neighbors describe Solomona as gentle and religious. He is not the type, they say, who would intentionally gun down someone over something so trivial.

It seems as though Mr. Solomona was fed up with being victimized, something to which many people can relate. But that does not give one the right to take matters into their own hands. There are laws in this country for a reason, and that is to prevent something like this from happening.

No one likes to feel as though he or she is being victimized. That feeling of powerlessness is hard to overcome, but reason and common sense must prevail.

According to the law, deadly force is appropriate if one’s life is threatened, and the likelihood that criminal charges will be filed are slim.

“If your life or the life of someone else is in imminent danger, then you can use deadly force,” Buena Park police Sgt. Chris Nunez said in an Orange County Register story.

That same power does not exist if one is only protecting property. And when the property in question is made of cheap plastic, it is absolutely ridiculous to think the use of deadly force is even an option.

We as a society do not have to accept that there are individuals who will commit crimes against us. Nor should we feel compelled to continue to be victims. But we do not have the right to play jury, judge and executioner.