By Enrique Gutiérrez, Ian Gratz on October 8, 1999 in Football, Sports 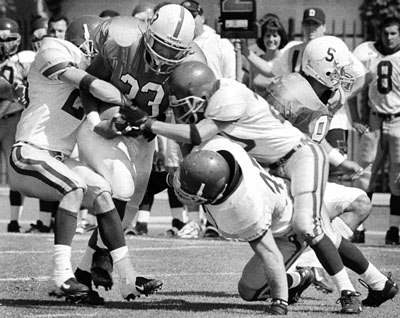 What could have been an easy game became a wake-up call for the University of La Verne football team.

The Leopards came out strong on Saturday afternoon and quickly took control over visiting Claremont-Mudd-Scripps. The scoreboard showed a 14-0 lead for the Leopards after only the first two minutes of the game.

“I thought we had them right away, especially in the first couple of minutes,” said senior quarterback Dan Blahy.

However, the Stags were not intimidated by an explosive ULV offense and made it a close game. The Stags fell short as La Verne got its third win of the year by a 31-28 final score.

The result leaves the Leopards two games ahead of Redlands in first place in the Southern California Intercollegiate Athletic Conference with an undefeated 3-0 record.

An 89-yard pass from Blahy to senior wide receiver Kenny Fredieu, who took the ball into the end zone, opened the door for the Leopards in their winning way.

When it seemed as if the Leopards were going to have a picnic day, mistakes gave Claremont a chance to come back.

The Stags’ comeback began when sophomore defensive back Chivas Fujimoto recovered a La Verne fumble and ran 22 yards to score with 10:42 to play in the first quarter.

La Verne, which accumulated 342 total yards to the 165 total yards by the Stags, regained its 14-point lead when Blahy scored on a 1-yard run as the first quarter expired.

But once again, right after a great defensive play which ended up being their fourth touchdown, the Leopards lost their concentration, allowing the Stags to regain some life in the game. 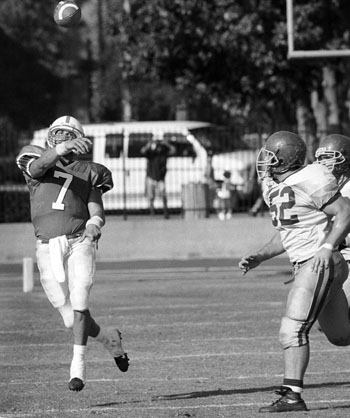 Senior quarterback Dan Blahy (#7) evades the attack on John Filson (#52) while throwing the ball down field. Blahy passed for two touchdowns for 250 yards and rushed for one touchdown. La Verne is now 3-0 in conference. / photo by Ian Gratz

La Verne senior linebacker Mike Sanchez blocked a punt at Claremont’s 20-yard line. The play was nicely complemented by junior Mark Myers who recovered the ball in the promised land.

On the very next play, Stags senior running back Steve Grove scored on a 95-yard kickoff return.

“That was a change of emotions. After the blocked punt we were pumped up,” Blahy said of the play, “and then they came back.That hurt.”

The score was 28-14 halfway through the second quarter and remained the same for the rest of the half.

Senior linebacker Mike Barreiro said the team needs to improve “on the special teams.” He also said that in order to win conference they will have to play a more solid game on both defense and offense.

Claremont wasted no time at the beginning of the second half and drove 76 yards to score on their first possession of the half. The drive ended on a 16-yard pass from senior quarterback Brian Banta to senior wide receiver Joel Weiss.

La Verne hung on to its seven-point lead for almost 18 minutes of play.

The Leopards wasted a big opportunity to increase their lead as they had a first-and-goal situation. On third and eight, La Verne was flagged for delay of game, one of the Leopards’ 11 penalties, moving the ball back to the 13-yard line.

Junior kicker Daniel Linder had a chance to redeem himself after missing short on a 45-yard field goal attempt in the first quarter, but his 26-yard attempt with 11 minutes to play was blocked and the Stags were anything but dead.

One minute later ULV recovered a Claremont fumble giving the Leopards great field position on the Stags’ 20-yard line. Yet again, La Verne failed to score a touchdown that would have put the game away.

But Linder would not miss again and he converted a 27-yard field goal to set the score 31-21.

CMS started the next drive on their own 42-yard line. With only four minutes to play they made it a one-possession game when Banta and Weiss combined for another touchdown.

“Claremont executed and they kind of knew what we were doing,” Morel said. “And they did a nice job.”

Blahy, who finished the day with 250 yards passing on 13 completions, said the Leopards played well in the first half, but not so well in the second.

“I’m not going to say we got lucky,” said Blahy who felt the Leopards should have won the game more convincingly.

Tomorrow the Leopards will visit undefeated Pomona-Pitzer at 1 p.m.