By Agke Grow, Ian Gratz on October 8, 1999 in Sports, Volleyball 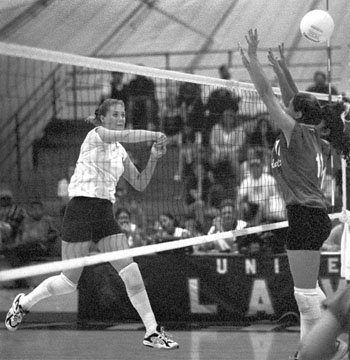 Junior outside hitter Amy Brummel hits through the blockers of Embry-Riddle to record another kill. Brummel leads the team with 56 kills this season. ULV is now 7-4 on the season and 2-0 in SCIAC. / photo by Ian Gratz

The University of La Verne women’s volleyball team has gained valuable experience during its three-match homestand. ULV dominated, were dominated, and now know what it takes to win a five-game match.

The Leopards, fresh off of a 3-0 win against SCIAC foe Claremont-Mudd-Scripps, played a non-conference match against Embry-Riddle on Friday.

After a long sideout battle to open the game, La Verne’s passing consistency began to wear down the Eagles, and the Leopards took the game, 15-11.

In game two, La Verne raced out to a 10-2 advantage, lead by junior Amy Brummel’s hitting and senior Allison Moore’s blocking. However, the Eagles fought back, and La Verne found itself ahead, 14-13. head coach Don Flora called a time out, and La Verne calmed down, sided out, and freshman setter Meridith Zembal finished the game off with a dump, giving ULV a 2-0 advantage.

Unforced errors and poor passing plagued the Leopards in game three, which slowed their offense enough for the Eagles to win game three, 15-10.

“Our ball control dropped off, and our hitting got tentative,” said Flora.

The fourth game featured more hitting and passing errors for the Leopards, and Embry-Riddle, led by 6’2″ middle blocker Christine Ahlstrand, gained confidence. With the match even at 10-10, La Verne was blocked twice and aced twice, and the Eagles had battled back to force a fifth game.

“We had a communication breakdown in games three and four,” said Zembal. “We just lost our focus.”

For the rally scoring fifth game, Flora rotated his lineup to match up Moore against Ahlstrand in the middle. This move proved to be the shot in the arm the team needed.

La Verne surrendered the first point, but that was the last time the Eagles would lead. Freshman middle blocker Stacey Lupu strung together three kills and a block, and ULV was ahead 6-3. The team never looked back. Moore blocked for four of the team’s final six points, and Brummel served up an ace on match point for the win.

“This is a great win for us,” said Brummel, who had 16 kills and 11 digs, both team highs. “We’ve practiced rally scoring a lot, and we decided to dig deep and work hard for the win.”

On Saturday, UCSD visited the Supertents and left with a win in three games. The Tritons dominated the Leopards statistically, holding a 43-24 advantage in digs and a .250-.110 edge in team hitting percentage. However, the most telling statistic was that UCSD served 11 aces, while La Verne had none.

“They’re a very good team,” said Flora. “We had trouble with our passing and ball control. Without those two things, we can’t do the job we need to do.”

Brummel and freshman outside hitter Kelsey Kennedy paced the Leopards with seven and five kills, respectively.

ULV put the non-conference loss behind them, and took a step towards their goal of winning the SCIAC on Tuesday by defeating Pomona-Pitzer, previously unbeaten in conference play, in three games.

The Leopards dominated games one and two, outscoring the Sagehens, 30-5. La Verne’s ball control returned, and it was Pomona-Pitzer which struggled to pass.

Game three started well for La Verne, but at 4-0, Pomona-Pitzer won two jousts at the net, gained some momentum, and scored nine unanswered points. The Leopards handled the Sagehen surge, regained their composure, and came back for a 16-14 win to end the match.