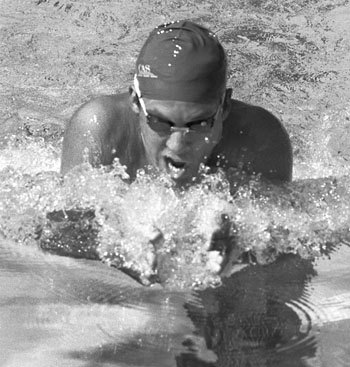 Sophomore Ryan MacDonald gives a hard pull in the breaststroke leg of his individual medley last Saturday at the La Verne Aquatics Center. MacDonald finished in second place with a time of 2:08. The swim team begins its regular season Nov. 6. / photo by Ian Gratz

The University of La Verne swim team surpassed the expectations of spectators, coaches and itself Saturday in a practice meet against California State University, Northridge, at the La Verne Aquatic Center.

Although the overall outcome of the meet was a 172-66 defeat for the Leopards, head coach John Hallman was content with the performance of his athletes.

“I was surprised at how much more competitive it was,” said Hallman on the improvement from last year’s competitive event with the Matadors.

With a only week of preparation, Hallman told his athletes that he expected to “win some battles” against the Division I competitors.

The men’s team won its first battle in the 50-meter freestyle event when sophomore John Chon took first place with a time of 22.47 seconds. Chon’s time was a mere three-tenths of second away from meeting the school record.

Soon thereafter, Leopards’ swimmer Roger Garcia came in first place for the men’s squad in the 500 freestyle with a time of 5:08.67.

The women’s team also gave noteworthy efforts in a variety of events.

Freshman Tiffany Yates shone for La Verne with her first place time of 25.95 seconds in the women’s 50 freestyle event.

Spreading the wealth were the women’s relay teams, who brought home some additional accomplishments.

One of the major women’s team highlights on Saturday came from the solo performance of relay member Lyons, who set a new school record in the 100 butterfly event with a time of 1:07.7.

“They had more numbers than us, but we put the pressure on them,” women’s co-captain Aimone said of the team’s performance against Northridge.

In retrospect of the meet, Hallman was pleased with the team’s experience.

“We have a starting point now,” he said.

Noting that in last year’s meet the Leopards defeated the Matadors in only one event (sophomore Jessica Morgan won the 500 freestyle last year), Hallman said he was additionally impressed with the team’s annual betterment and overall unity.

The La Verne swim team will use its starting point to compete in the Pomona-Pitzer Invitational a week from tomorrow. Competition is scheduled to begin at 9 a.m.