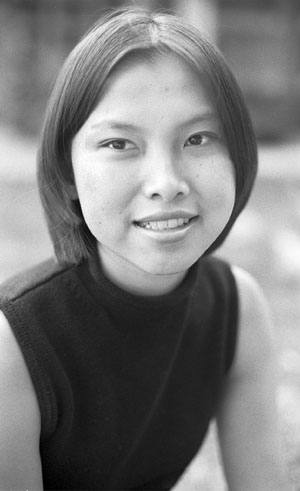 Indonesian citizen Melinda Tetanto is in her first year at La Verne. After her parents felt her life was in danger in her home country, they sent her to find refuge in America. Despite the relative safety of Southern California, she confesses to missing the familiarity and comfort of her home. / photo by Ian Gratz

The decision to leave home and go to college can be difficult for many young people. For Melinda Tetanto, a University of La Verne freshman, leaving Indonesia may well have been a matter of life and death.

In July 1998, Tetanto’s parents decided that ethnic and religious strife was putting their daughter’s life in danger, and that her safety could no longer be guaranteed. Within two months, she was on her way to California to stay with relatives and finish 12th grade in the United States.

Tetanto did not want to leave.

“At first I thought it was a joke,” she said.

It was not. “It happened very fast. I was not prepared for that. Suddenly, I just had to leave everything. Just like that. I cried every day,” she said.

Why would she have been in danger in a country known mainly for its tourist attractions, like the beaches of Bali, good food and friendly people?

“They don’t like Chinese people in Indonesia,” she said.

The two largest ethnic groups in Indonesia are Chinese and ethnic Indonesians. The fact that Tetanto is Chinese alone, she said, would not have put her in grave danger. But for years, ethnic and religious turmoil has made life uneasy for many people living in Indonesia.

There are five legal religions in the country: Hinduism, Buddhism, Islam, Catholicism and Protestant Christianity. Like most Chinese in Indonesia, Tetanto is Catholic. Most ethnic Indonesians are Muslims.

While the Hindus and the Buddhists are mostly peaceful, Islamic and Christian fanatics have been terrorizing each other for years. It is not necessarily only Indonesians who attack ethnic Chinese. Ethnic Indonesians belonging to different religions also fight among themselves.

It is difficult for Tetanto to understand why the different groups cannot get along.

“They should control their emotions. It is not rational. They don’t use logic,” she said. She had to admit, however, that “it is sometimes hard to like [ethnic] Indonesians because of the way they treat us.”

Yet, the fact that Tetanto’s best friend, who is currently studying in Australia, is ethnic Indonesian clearly shows that she has overcome this obstacle.

The recent conflict in East Timor, which is a part of Indonesia, shows the dimensions of the problem. The Indonesian government does not want to grant the people of East Timor independence.

“I think it is an issue of pride,” said Tetanto.

The government is afraid of encouraging other provinces to ask for independence too, she said. The province of Aceh in North Sumatra already wants to be independent to establish an Islamic state.

In 1975, East Timor, a former Portuguese colony, became a part of Indonesia. Tetanto said elections were held about East Timor’s political future but opponents of the Indonesian government were thrown in jail.

According to Amnesty International, Indonesia has a history of human rights violations in East Timor.

Tetanto also said there has been talk about a “second Yugoslavia” occurring not only in East Timor but in the whole country.

“Because every ethnicity thinks that they are better,” Tetanto said. “They are trying to kill each other.”

Churches and Mosques have been burned, people have been killed and women have been raped, she said.

Nothing happened to Tetanto herself, but one of her relatives, who lives in Jakarta, the capital, had her house burnt down and was attacked with a knife. Just blocks away from where Tetanto lived, a bank became a victim of flames as well.

Tetanto knew she was a potential target because she was Chinese, Catholic and a woman. But she did not want to acknowledge the threat.

“I ignored it for the sake of fun,” she said. “I’m not scared,” she remembered herself thinking. “All my friends are here and they are not scared either. Why should I be scared?

“But after I came here I started to realize that probably what my parents think is really good because I cannot imagine if something really happened to me.”

Tetanto said that since the United Nations got involved in East Timor, the Indonesian government tries to pay more attention to the problems in the country.

“The U.N. is involved in East Timor, but I think it also has an impact on the rest of Indonesia,” said Tetanto.

Another reason for Tetanto not to feel safe was her social status. As a member of the middle class, she became a target for the many poor people left by the economic crisis of 1997 and 1998.

“There were poor people before the economic crisis,” Tetanto said, “but you did not really see them.”

The crisis made things worse.

“A lot of people [say] don’t wear your jewelry, don’t wear your watch, don’t carry a bag,” she said. “There are a lot of things happening. They might just take it away from you.”

The economy has partly recovered in the mean time.

Despite the circumstances that made her leave her homeland, Tetanto is a lively and friendly girl, who likes to have fun and always learn something new.

With limited knowledge of the English language — she had only taken one short course for fun at home — she enrolled in such classes as physics, math, economics and U.S. government right away when she came to high school in the United States.

“I had a hard time for the first two or three months but then after that I got used to it. I think I did fine,” she said. “My grades were fine.”

When ULV offered Tetanto a scholarship, she accepted.

“La Verne is a pretty good place,” she said. “I like it because it is kind of peaceful.”

Although Tetanto has gone back to Indonesia twice since she came to California, she does not know whether she wants to go back for good.

“I’ll have to see how I can adapt to the United States,” she said. “Because right now I’m kind of in the middle.”

Swim dives off against Northridge
Women rebound with 3-0 victory