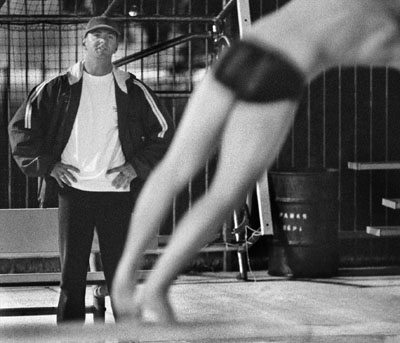 Justin Borba remembers his days on the UC Santa Cruz diving team. His coach left after his first season, so Borba shouldered the difficult task of both diving and coaching the following year.

“And I did neither very well,” he said.

The coaching situation was sorted out by the next season, and Borba, able to focus on his diving, broke three school records and earned All-American status.

Thus, it should come as no surprise that Borba was happy to coach the University of La Verne diving team, one that had no coach last year.

“I know from experience how hard it is to be without a coach,” he said.

Borba, 27, is the new graduate assistant for the University of La Verne swimming and diving team. Unlike most G.A.’s, who have responsibilities similar to assistant coaches, Borba is essentially the head diving coach.

A graduate from UCSC in 1997 with a degree in psychology, he is now planning to complete his master’s degree in general counseling.

“This is a once in a lifetime opportunity,” said Borba, “and I didn’t want to see it pass by.”

The schoolwork is challenging, and Borba had been out of the classroom for quite some time while working in Silicon Valley.

However, Borba is enjoying the challenge, and likes the fact that graduate students often pull together and help each other out.

“I’ve been bogged down with a ton of school work, but it’s a really good place to learn,” said Borba. “The longer I’m here the better I integrate.

“You get to be a part of something. People seem friendly, and there is a good sense of community.”

In addition to joining the graduate student community, Borba is also a major component of the diving team this year, a team full of potential.

“This is some of the best talent I’ve ever worked with,” he said. “It’s exciting to work with athletes who are genuinely interested in improving.”

Borba’s job as the first true ULV diving coach is to channel the team’s talent in a positive direction and refine his divers’ techniques.

“I’m here to help, but I don’t spoon-feed my divers,” said Borba. “My working relationship with the team is, ‘I’m here to help you, what do you want to work on’.”

Last year, both the men’s and women’s swimming and diving teams finished 4th in SCIAC, and with the addition of Borba to the coaching staff, bigger goals have been set.

“In the short term, we are trying to clean up our dives,” said Borba. “We’ve got talent, but there are some little things we can fix that make the dives that much better.”

As for long term goals, Borba’s squad is looking to take both first and second place at the conference meet Feb. 17-19.

“It will take a lot of work,” said Borba, but he feels that it is within the team’s reach.

His divers are making good progress toward that goal. Freshman diver Sara Kears took first place on both the one-meter and three-meter boards, and her teammate, sophomore Debbie Lewis, finished second in the three-meter event at Saturday’s Pomona-Pitzer Invitational.

“We’re a little farther than I expected us to be talent-wise,” Borba said. “Numbers-wise, we have too few [divers].”

There are only two women and one man currently diving for the Leopards, and according to Borba, many teams enter eight divers into competitions.

“We may have lost some divers because I didn’t secure this job until the end of the summer, ” said Borba. “It’s logical that if a student is choosing between here and another school, and that other school has a diving coach, they’re going to the other school.”

He plans to recruit more members to fill out his roster next year.

Borba is pleased with the facilities that are in place at the La Verne Aquatic Facility, but he noted that some things that are not present, such as a trampoline, could be beneficial to the team.

“I like what’s here, but there are some things we could use, and maybe we’ll see them as the program progresses,” he said. “But I’ve seen divers advance farther than we are right now with less than we have.”