By Brice Nixon, Ian Gratz on November 19, 1999 in Basketball, Sports 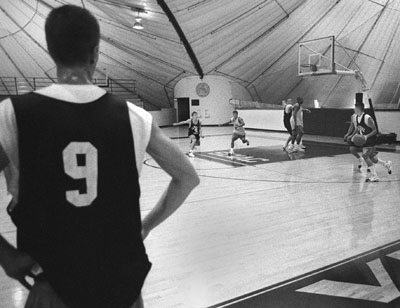 Junior guard Kevin Gustafson (#9) looks out on the 1999-2000 ULV men’s basketball team during a transition drill in practice Monday. Last year, the team finished third in SCIAC behind Pomona-Pitzer and CMS, and look forward to settling the score this season. / photo by Ian Gratz

ULV returns only one upperclassman who saw significant playing time last year. But the one who is returning is one of the conference’s best.

“I think our leader,” said head coach Dan Mulville, “at both ends of the floor, I hope is going to be Kevin Gustafson. He’s improved a lot in this off-season. It’s very noticeable in practice every day.

Other than Gustafson, however, Mulville sees a lot of young players who must prove they can play at this level.

“The rest of the guys are totally unproven,” said Mulville. “So it’s kind of like Kevin and a lot of guys trying to show what they can do.”

There are a few who have limited experience, but questions remain as to whether they will be able to compensate for the loss of All-SCIAC players Ken Cauley (First Team) and Ryan Burchfield (Second Team).

“I don’t know who’s going to replace them,” Mulville said. “I think we have some good players in the program, but it’s hard to learn how to compete at this level.

“We’ve got a few new guys who are good players but they’re not proven competitors in this league at this level,” he said. “So I don’t think we’re going to replace them, particularly in terms of statistics.”

“He’s going to be a strong force inside when he gets into the shape that he needs to get into,” Mulville said of Greg. “He’s had a long layoff. He’s working his way back into game.

“Cameron Chappell,” said Mulville, is “coming back off a redshirt year. It’s his fourth year here at La Verne so he kind of knows the ropes. He’s a really outstanding defender. We’re trying to evaluate if he can run the show at the point guard.”

Three other players, all new to the team, have also made impressions on Mulville.

“Shawn Keilty’s got a lot of talent,” Mulville said of the sophomore transfer from Citrus College. “He learned how to work at the level that’s required here. He’s going to be a real good player.

With all this potential and unproven talent, Mulville is not sure what to expect.

“Everything’s very much up in the air right now,” Mulville said. “I don’t know where we’re going to be. We’re trying to win [SCIAC], and I think we can. I feel like we’ve gotten to where our talent would allow it.

“Our goal, that people would understand who aren’t here everyday, is to win SCIAC. That’s an obvious goal.

“But within our team, really our goal, is to play as hard as we possibly can everyday, every game. It’s that old definition of success. Success is being satisfied that you gave your best to become the best that you’re capable of becoming.”

Mulville said he thinks once conference play begins, the Leopards will have improved and gained enough experience to challenge for the title, but their record may suffer from tough non-conference games.

“We just want to work as hard as we can to get as good as we can,” said Mulville. “I don’t know how good that is right now. This group has really, so far, been hard working. They’re really together, better than the last few teams we’ve had. It’s exciting to come to work every day knowing that we’re going to work hard for two hours, we’re going to get along, we compete pretty well.

“If we play hard and get better every day, then I think that things will happen by the time conference comes around. It’s all about SCIAC. It doesn’t matter who the best team in November is. It’s who’s the best team in February. And that’s what we’re going to try and be.”