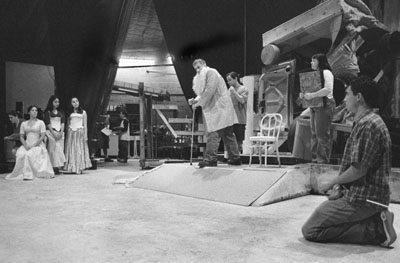 The University of La Verne’s Department of Theatre Arts presents Calderon de la Barca’s “Life is a Dream,” which opens tonight at 7:30 p.m. and continues on Nov. 6, 11, 12-13 in the Dailey Theatre. General admission is $8 and $5 for students, faculty and senior citizens. Obren Milanovic, a sophomore, plays the king. Throughout the play, Nia Foes, a junior, and David Rojas, a sophomore, play the two leading roles, trying to discover their own definition of honor. / photo by Jaime Ortega

The play “Life is a Dream” opens at the University of La Verne’s Dailey Theatre tonight, with many people anticipating the success of this 17th century play from the Spanish Golden Age.

“Life is a Dream” was written by Calderon de la Barca and is set in Poland. Barca is a Spanish playwright whose plays are known around the world for their diverse content.

“Calderon was a very famous playwright during that time period,” said Ivica Bojcic, public relations director in the Theatre Department.

There are three plots in the play, all of which come together at the end of the play. The plots emphasize how each of the characters seek honor. Each character seeks individual honor through violence and by different people, all in various situations.

“How can a 17th century play relate to today?” asked Stephen Shade, adjunct professor of theatre arts and director of the play. “Violence as an agent of honor may seem ridiculous, yet every day the news overwhelms us with a rash of shootings in schools, hospitals and workplaces,” he explained.

The first plot tells of Basilio, the king of Poland. He strongly believes in the supernatural and astrology. His son is born with a prediction that he will become a bad king. In order to keep anyone from knowing this prediction, Basilio locks his son in a tower from the day he is born.

The second plot deals with a woman named Rosaura, who ventures into Poland for two reasons. The first is to find out who her father is. The second is to find Astolfo, the duke she had an affair with, who left her after he found out she was not of high rank or royal blood.

Astolfo wanted to become king after Basilio, so it is a crucial point throughout the play that he marry someone of high stature.

The final plot deals with Estrella, Astolfo’s cousin, who wants to become queen after Basilio dies.

All of the plots tie in together, when Basilio decides to let his son out of the tower to be king for a day. If he succeeds in this, then Basilio will reconsider letting his son carry the throne.

However, if his son fails, Basilio will lock him back in the tower for eternity.

The events that transpire throughout “Life is a Dream” lead to a climax that resolves all of the troubles that the characters endure throughout the play.

“This is a metaphysical play that deals with issues of perception of reality,” said Bojcic. “It also deals with challenging questions of good versus evil in society and in every individual.”

During the time period in which this was written, many plays were based on the idea that honor was a public virtue. “Life is a Dream” is also based on this concept. The characters consider themselves honorable only if other people see them as such.

“Since the dignity of the individual rested on his reputation within the community, honor was maintained by successfully overcoming attacks against one’s social status or reputation,” said Shade.