By Damien Alarcon, Ian Gratz on December 3, 1999 in Sports, Volleyball 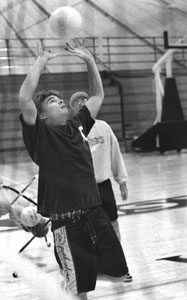 Entering the 2000 season as defending national champions, the University of La Verne men’s volleyball team will attempt to repeat what was immensely deserved a year ago.

Unfortunately, some key performers from that group have either graduated or transferred to other schools.

Outside hitter Chris Peterson finished his eligibility with ULV last year and transferred to Humbolt State.

Outside hitter Sean Douglas graduated last spring, but now helps out as an assistant coach.

“The middle [blocker] position is an experienced position, it is not something you kind of just step into,” said head coach Jack Coberly. “You have to have done it for a while to really feel for that position and know what it takes to play that position.”

The most devastating blow to the squad is the lost of junior Alex Lienert, last year’s Division III Player of the Year.

Lienert decided to take the semester off and transfer to UC Santa Barbara in the spring.

“We did not recruit for his position since Alex didn’t inform us that he wasn’t coming back,” said Coberly.

Filling that hole is dependent on a player trying to get accepted into school for the spring semester, Fernando Salba.

Seniors Luis Cruz, Dave Spegon and Matt Wright are expected to be huge contributors to the team as playmakers and leaders. All three were starters last year.

Cruz will look to make the same impact he had last year at the middle blocking position. Unfortunately, Cruz suffered a strained ligament in his ankle at a recent practice.

Coberly said that Cruz “has tremendous jumping ability. He is a good blocker, a power hitter and I will depend on Luis to be able to do lot for this team.”

Spegon, team captain, alternated at the starting outside hitting position last year with Petersen. He took over after Petersen injured his hand early in the season.

Wright made the All-Tournament team as a setter in the National Championships last season.

“Matt is small, but he makes up for that with his ability to control the ball,” said Coberly.

Junior Agke Grow contributed to the team last year when solid defense was an absolute must. Coberly and the rest of the coaching staff will be working Grow into a new position implemented by the NCAA called libero.

The libero is a defensive specialist position that gives the player unlimited substitutions, but he can only play the back row and cannot attack the ball.

“With the libero position, we don’t have to do a formal substitution. He could just go right in,” said Coberly.

Also returning to the squad are sophomores Tom Hilton and Clint Weiler. Hilton will work in the middle blocker position, while Weiler is building to strengthen the setter position.

As far as incoming freshmen, Coberly is more than happy with the new and talented group.

At 6’6″, freshman Nathan Silva is fighting for the starting middle blocker position. Freshman Jake Swann is battling to fill one of the outside hitting spots vacated by Petersen and Douglas.

“Offensively, we are not as strong as we were last year, but defensively we are,” said Coberly.

“For us to win games, this team must play with a lot of heart and emotion.”

The team begins play Jan. 7 at the UCSB Invitational.