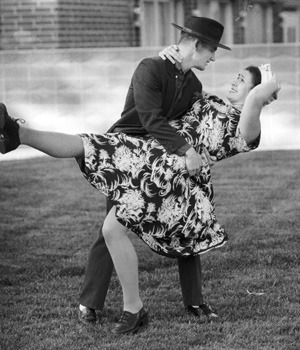 “Red Carnations,” directed by senior Jammie Lawrence was performed Friday at the Peace Mall near Woody Hall. Playing the suitor, economics major Brandon Smith presently works as a bartender but plans to graduate from college and work toward becoming a certified public accountant. Playing the woman, musical theater major Marisa Borowitz is currently in her second semester at Pasadena City College. Majoring in diversified education with an emphasis in theater, Lawrence is enrolled in Directing Studio at ULV and made her directorial debut with “Red Carnations.” / photo by Naoko Yokota

In the directing students class at the University of La Verne, students experienced their first project in their directing careers.

The student director program has been running for 18 years at ULV. The program is for theater majors and for diversified students with a theater emphasis. This semester the program had 12 students, the most it has ever had.

Jammie Lawrence, a senior who will graduate in December 2000, directed “Red Carnations,” a play by Glenn Hughes, last Friday and Saturday.

Lawrence is a diversified student with a theater emphasis and feels that the experience of directing and being in control of the whole play is much like being a teacher, thus gaining valuable experience.

With little theater experience, she used information and skills that she learned in a theater class she took during January interterm, and her own skills and knowledge going into her first project.

Dr. David Flaten, director of the Theatre Arts Department, believes that these first projects are an approach toward their directing careers.

“The only way to learn to direct is to direct,” said Dr. Flaten.

“In theater you have to know who you are. Everything you know about everything is useful,” said Dr. Flaten.

According to Dr. Flaten, the skills and know how of directing are not found in a text book or rule book. The knowledge is learned through experience. The learned techniques will help the students in their second project in May.

“In directing there isn’t one way,” said Dr. Flaten.

Some directors may use a design team to help them prepare and find costumes and props for their plays. Lawrence, however, took a different approach.

Instead of turning to a design team, she took off on her own and turned to her old high school for costumes. She found an outside setting for her play and did not need many props for her project.

Lawrence did have trouble in finding available cast members. She went through a trial-and-error period before finding a final cast. Her original cast was not able to stay committed to her project, and she ran into another brick wall when another cast member had to drop out.

She found her final cast from friends who were willing to help even though they had no previous acting experience.

“There is a very steep and very empowering learning period,” said Dr. Flaten.

This learning period, much like Lawrence’s casting trial and error period, is known as the action reflection cycle. This is a process in which the director will take an action, and then reflect back on the action and then analyzing what worked and what did not. From there, the director will repeat the cycle.

“Each action makes something else possible,” said Dr. Flaten.

The directors had two weeks to find their cast, put their sets and props together and hold rehearsals. Lawrence worked on her project for three weeks. She worked on the play a week or so in advance. She worked on getting the royalties, the budget and reading the play.

“I read the play over about once every hour, making sure I understood what was going on and what I wanted to get across to my audience,” said Lawrence.

Lawrence gained a better perception of how important a director is in the process of putting on a play. Along with these duties, she said, came a lot of stress.

During the stressful times, Lawrence not only received help from her family and friends, but found support and a guidance in her classmates and teachers.

She used games and acting techniques learned from Steven Kent, adjunct professor, to help her cast. She also turned to Dr. Flaten for advice concerning receiving royalties for the play. Her classmates also gave her advice and support.