By Campus Times Editorial Board, Melinda Sanchez on March 31, 2000 in Editorials, Opinions 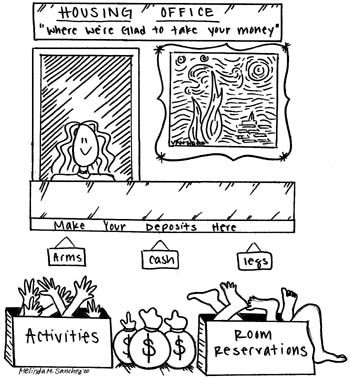 Students living on the University of La Verne campus dealt with the annual ritual of reserving or “squatting” their rooms this week, only to be reminded of Housing’s mindless tradition of charging their residential community a plethora of fees.

The scene is the same from year to year: Countless frustrated residents making their way to the Office of Housing to begin the reservation process.

Immediately following the “Hello” is the requirement for students to pay $25 for what the department calls an “administrative processing fee.” This does not guarantee the resident anything but an application and the opportunity to pursue the possibility to live in one of the four residence halls.

Perhaps this would not seem so inconvenient if some of the surrounding universities used similar protocol with “administrative fees.”

But that is not the case.

Students living on campus at Chapman University are fortunate enough to avoid the hassle of paying an asinine fee to merely pick up a piece of paper.

Students residing at residential campuses like Claremont McKenna and Redlands University avoid such a policy as well.

Residents of the on-campus housing facilities at Cal Poly Pomona are also given the right to reserve their rooms without the worry of paying to display an interest in living on campus.

The only financial concern for students living on campus at these other local schools is a reasonable and logical one: to pay for the living space itself.

However, ULV residents could go on and not be too distraught with the fee knowing that, at the very least, they had a place to live.

Then again, they might be frustrated with the fact that they are required to pay a $20 activities fee upon moving into their room.

“I have to wonder what it’s going for because I haven’t seen much in the way of programs this year,” said senior Rick Garcia, ULV resident of three years, and former resident assistant for two.

Garcia is one of many residents who have payed a number of Housing’s fees only to gain a minimal return.

“Upgrading and retrofitting some of the rooms would be nice,” said Garcia.

With the lump sum of the fees received by housing, students are provided programs which are supposed to meet the interests of the residents, but usually do not exceed the excitement of an ice cream social once every two months.

Unfortunately, housing at ULV does not offer students the same alternatives enjoyed by residents at Cal Poly Pomona where the activities fee is optional and only charged to those who want such services.

According to the Guide to Residential Life for ULV, the No. 1 goal in Housing’s “Mission and Vision” is to “advocate for the common good and champion the rights of individuals.”

The student residents at the University should be given the individual right not to be charged in excess for services rendered which are standard at other universities.

And if the University should choose to do so regardless of the students preference, residents paying these fees should see a result that actually provides a benefit for the “common good” rather than a service that is to be expected.