By Campus Times Editorial Board, Isela Peña on April 14, 2000 in Editorials, Opinions 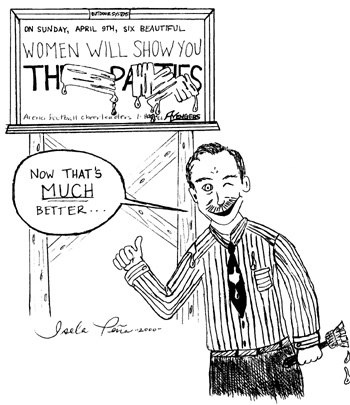 The ad campaign run by the Los Angeles Avengers, the new local Arena Football League team, caused a stir. By now, most motorists have seen the large, all-text billboards that have been posted by the team. The edgy ads, some of which allude to sexual acts, are designed to catch one’s attention first, and then entice customers to buy tickets.

Some people believe the ads are witty and humorous. Others are offended by the way the Avengers are shamelessly utilizing sexual overtones in an attempt to make money. In any case, most look at the billboards, form an opinion and move on.

However, Rick Cole, Azusa’s city manager, took it upon himself to prevent people from having to look at a billboard in his city. “It is no secret I found [the billboard], a block from a city playground, offensive to me and the families of Azusa,” Cole said in a Los Angeles Times article. He was so offended, in fact, that he drove a municipal vehicle to the billboard, raised the cherry-picker on the vehicle to reach the billboard, and painted over the last two words on the ad, which read, “On Sunday, April 9th, six beautiful women will show you their panties.”

“I took action to address that concern. Of course, I accept fully responsibility or any consequences,” Cole said. Cole is not the only one upset about the billboards. Many people are concerned about the messages the billboards convey to their children, and would rather not have such racy advertisements in their cities. These are understandable concerns that justify a closer look at whether the billboards have a place in the Los Angeles area.

What is inexcusable about what Cole calls “the action” is that he, along with several residents, including City Councilman Dick Stanford, knowingly committed criminal vandalism. To maintain order in our society, we must all exercise restraint and tolerance when faced with something we disagree with. Residents in other cities shared the concerns that Cole had when he defaced the billboard. However, those citizens had the patience to address the issue in a proper and legal manner.

“We changed billboards in Hawthorne and Venice after complaints,” said John Tamahana, team spokesman for the Avengers. “Mr. Cole knew what the channels were because he contacted [us]. But before that he decided to commit an act of vandalism.”

They decided not to take any action. This sends a message to our children even more obscene than the ones on Avenger billboards.

Imagine a world in which all people who are offended or worry for the moral well-being of their children are permitted to act any way they see fit. Chaos is the end result. Anti-abortionists bomb abortion clinics. White supremacists burn down black churches. People intolerant of gays and homosexuals discriminate against them.

Cole rashly committed a crime. He openly admits to being so outraged by the Avengers billboard that he doused it with paint. Cole also admits that he did not think through the ramifications of his actions.

Of course, Cole and his supporters claim that they were acting in the best interests of Azusa’s population. “This is a city of families and churches,” said Councilman Dick Stanford. “We were acting on principle.” Unfortunately, Stanford does not seem to realize that he was acting on his own principle, which is not universal to all the residents of Azusa. Even if everyone in Azusa agrees with Cole’s decision to paint over the billboard, there is no escaping that he has committed a crime.