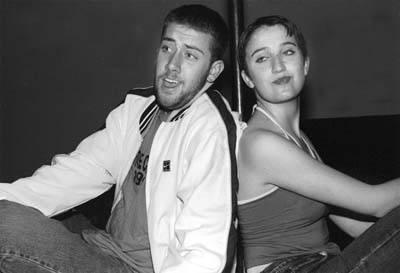 It requires a warning label for explicit content. It questions sexuality and the meaning of its relations. It is a controversial and sensitive play that is sure to open the eyes of its audiences.

“La Ronde” is coming to the Dailey Theatre mainstage April 10 to 14. Shows begin at 7:30 p.m. and encompass students and guests into a circle of sexual encounters.

On a scale of university life, “La Ronde” is a 10-scene production analyzing casual sex. It centralizes on empty relationships and their value in society.

“I believe it’s going to be intriguing for students and their sexual attitudes, but it won’t be harmful,” said University of La Verne adjunct professor Georgij Paro.

As the visiting director of the National Theatre of Croatia and director of this production, Paro explains, “They [people] don’t believe anything good will happen in their lives, but they still need someone to be with. They go from one adventure to another not caring much and not gaining anything other than a moment of excitement.”

The play originated from the creative culture of the early 20th century in Vienna. Playwright and author Arthur Schnitzler masterminded its plot in 1903 and nine years later, finally got to witness its production.

Ninety-seven years ago, this play was too outrageous and too risky to perform. Today, it is slightly outdated and has been modified to fit the likes of society.

“There has been a little change made. We added one homosexual and one lesbian connection,” said the director. “Nowadays love is not only recognized between a man and a woman, it is recognized between two men and two women, and we can openly speak about that. There are no restrictions, there is no taboo anymore. So, it is not changing the script, but just adapting it for society today.”

Students may be more familiar with Schnitzler’s work than they thought. The recently released film directed by Stanley Kubrick, “Eyes Wide Shut,” is based on a short novel written by Schnitzler.

The film, starring husband and wife team Tom Cruise and Nicole Kidman, received controversial and conflicting reviews. It nevertheless introduced the generation of today to Schnitzler’s work of the early 20th Century.

Another familiarity can be dissected from the play. The majority of Sigmund Freud’s studies served as a foundation to Schnitzler’s artistic expressions.

Freud is said to have admitted the connections between his findings and Schnitzler’s art.

“La Ronde” is a display of the emptiness of life in the 1900s. It reflects the emptiness that still exists today. “La Ronde” may help students, faculty and community members recognize disguised situations similar to these.

“Let it [the play] be a mirror put in front of them [the audience] so they can reflect their own thoughts and ideas based on what they see,” Paro said.

Deja Collier, who plays the role of the parlor maid said, “There are deeper meanings to relationships than just sex and everyone going to the same bed.”

She says she hopes students will walk away laughing while simultaneously realizing the seriousness of the subject.

The play in its version adapted by the ULV Theatre Arts Department is a challenging one. It is introducing something new for the theater culture at La Verne and its audiences.

The theater arts program does a lot of defying work and through this effort, frequently tempt audiences with different perspectives.

Question your morals and be one of the lucky ones to witness the professionalism of “La Ronde” cast.