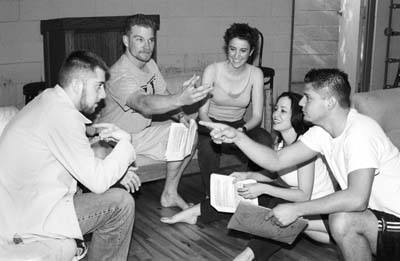 Senior Dustin Lorentz (second from left) chats with cast members sophomores Obren Milanovic and April Shenkman, senior Jessica Wotherspoon and junior Carlos Moreno in his senior project play, “No Exit,” written by the founder of modern existentialism, Jean Paul Sarte. Lorentz began acting when he was a child and has been in love with it ever since. / photo by Naoko Yokota

Philosophy. Existentialism. Theater. Criminal law. These four words do not seem to have much in common to most people, but to senior philosophy major Dustin Lorentz, they make perfect sense.

Lorentz began acting 12 years ago when he was a child, and has been in love with it ever since. While attending Dana Hills High School, he participated in theater classes, and as fate would have it, competed in the theater competitions here at the University of La Verne.

He was offered a scholarship from ULV when he was still a freshman in high school because they mistook him for a senior. Each year he came back to compete, ULV offered him a scholarship, forgetting he was only a year older. Finally, his senior year, he accepted the scholarship and came to ULV.

As a philosophy major, Lorentz said many consider the subject boring at first glance.

“When you really examine philosophy, it’s not like that. It’s boring on paper, but it’s a lot greater to see the philosophical implications of existentialism on human beings,” he said.

His love for theater has taught him a lot about humanity. He said the best way to learn about people is to act out the actual situations, and to some point, become those people.

“You learn a lot about everything by acting,” said Lorentz, “[You learn about] psychology, history, emotions, how to deal with people and how to be a good public speaker.”

Even though he is a philosophy major, Lorentz admits his real love is theater. Having already acted in 30 some-odd productions, Lorentz is taking on a new adventure — directing. For his senior project, Lorentz is putting on a drama called “No Exit,” which is written by the founder of modern existentialism, Jean-Paul Sartre. The play is primarily about three people who are stuck in hell together. Lorentz said the characters are unscrupulous, lying and deceptive individuals in the play.

“With ‘No Exit’ we’re really pushing the human condition, the human emotion and the human experience to the limit. You’re going to see these people break down and cry, break down and beat each other up. It’s a real psychological drama — the psychodynamics between the characters is amazing,” said Lorentz.

“The play goes through the entire range of human emotion — love, obsessions, paranoia, crying and sex — all in a 45-minute piece.”

“The four actors I have in it are absolutely amazing. They’ve been doing some hard work,” he said.

Lorentz said he chose to put on a play for his senior project because he wanted to fuse his love of philosophy and theater together and break from the norm of writing a paper.

“I’m an actor,” he said, “and if I’m going to leave this school, I’m going out with a bang. I want to do something dynamic.”

Lorentz recently acted and directed the play “The Great Shark Hunt,” adapted from the novel by Hunter S. Thompson. He said acting and directing was the worst mistake he has ever made because actors need to have that objective eye from their directors.

“You need to be out in the audience and able to watch,” he said, “and when you’re acting, you’re watching too much what you’re doing.”

Lorentz is also in another play, called “La Ronde,” directed by Georgij Paro, who is head of the national theater in Croatia. The play is a dark comedy farce about promiscuity, deception and sexually transmitted diseases said Lorentz. “I’m quite frankly disturbed when I see it, which I think is good — disturbing in a good way,” he said.

After graduation, Lorentz plans to apply to one of the Claremont schools, and wants to earn his Ph.D. in criminal law. He said as a philosophy major, one learns dialectical argumentation and logic, which one needs to become a trial attorney.

Lorentz attributes much of who he is to his father, Joseph Lorentz. “If it wasn’t for my dad, I don’t think I’d be in college,” he said.

Lorentz said his dad has always been supportive, made sure he stayed on track and made him value education. He also feels Jane Dibbell has been influential in his life. Jane Dibbell, he said, “was the other voice on the other side of the phone asking me to come to ULV.”

Show times for his production “No Exit” are April 25-27 at 7:30 p.m. in the Cabaret Theatre and admission is free. Lorentz promises this upcoming production to be “ground breaking in terms of philosophy or senior projects.”

ULV deserves spot in limelight
Letters to the Editor