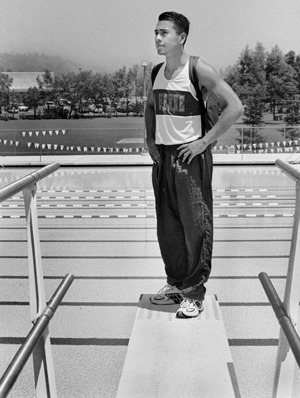 Junior Mario Guerrero has immersed himself in ULV. Guerrero is a member of La Verne’s cross country and track teams, a diver for the swim team, an honors program student and will lead next year’s Associated Students Federation (ASF) Forum as president. / photo by Jason Cooper

by Damien Alarcon
Editor in Chief

Responsibility and patience are virtues that Mario Guerrero has gained in the 22 years of his life. Next year, he will need those factors to thrive during his final year at the University of La Verne.

Guerrero was recently elected to run the Associated Students Federation (ASF) Forum as next year’s president. But his duties as president are not the only things that will keep him busy.

The La Puente native, who is a political science and Spanish major, is a member of the cross country, diving and track teams and is on the reserves list for the United States Marines.

As a reserve, Guerrero is obligated to spend one weekend a month to endure basic physical and mental training. He has been involved in the Marines for four years.

He is also an active member of the Phi Delta Theta fraternity, and has been involved in the Latino Student Forum (LSF). He works in the Learning Enhancement Center where he tutors ULV students with Spanish and College Algebra.

He also works in the computer lab at Mt. San Antonio College. He intends on keeping both jobs throughout next year as a fifth-year senior.

Guerrero has been a part of ASF for two years, although was not as active this year as he was the previous year. Last year, Guerrero served ASF as secretary, and then studied abroad the fall semester. When he came back for the spring semester, he tried to keep his involvement in the organization by attending meetings and contributing ideas.

“I came back from Spain and saw how things were and decided that if I cared so much about ASF, I was going to have to join and do something instead of just standing at the sidelines and complain,” said Guerrero.

Now, Guerrero is given the power to make more of a positive impact for the student body. He believes that there is much work to be done in ASF.

“I think that the representation that ASF did this year to include everybody wasn’t enough,” said Guerrero. “I think that some of the decisions with the money that was spent weren’t too good.”

Guerrero intends to build better communication between ASF and all other organizations and clubs on campus to make ASF events better and with more people involved.

He also wants to have better communications within ASF itself.

“I actually went to some of the meetings and saw not much communication going on. There are a lot of internal problems that I think I can fix,” he said.

Guerrero does not want to focus more on commuters, on-campus students or recognized clubs at ULV, but wants to give attention to the needs of each.

He said all students deserve a fair representation because “everyone pays a certain amount to be in it whether they like it or not.”

“I want to increase the presentation for commuters because commuters make up a bigger portion than on-campus students,” he said.

For ASF-produced student activities, Guerrero is content with the number of them. “I think that there is enough, but I am always open to more ideas,” he said.

Michael Houdyshell, ASF adviser and coordinator of campus activites and commuter programs, said, “I think Mario has really, really good ideas for ASF and for the student body. He is very driven to see good things happen and make some changes. We look forward to having a great year.”

Houdyshell and Guerrero are eager to have an excellent year of ASF. Guerrero said he is looking forward to working with the newly elected officers.

“I think we have a great team coming aboard. Some of them I have not worked with before so we will see how that goes. A lot of them have already expressed the fact that they really want to work hard. As long as we keep good communication and work as a team, then it will be the best ASF year,” said Guerrero.

He said that he has much confidence in the two vice presidents, Alicia Southorn and Kristine Werthwein, because of the efforts that he has seen by their actions and contributions they have had in ASF.

Southorn, vice president of activities, is said to already be preparing for next year’s Homecoming Guerrero said.

“I know she is going to do a great job. She is just awesome when it comes to setting up activities for the students,” he said.

Guerrero is looking forward to this year’s graduation ceremonies because he is scheduled to serve as a grad marshal for the second year in a row.

“I look forward to saying farewell to a lot of my friends,” he said. “It is an honor.”

Predicted champs in sports world
In the News