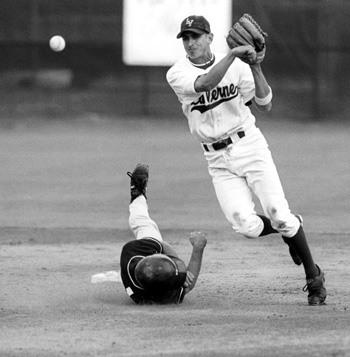 Shortstop Eddie Muñoz turns an easy double play during last Friday’s 10-2 victory against the University of Redlands. This was the first of two wins in the three-game series. / photo by Juan Garcia

The first game of the series was played at Ben Hines Field and featured the Leopards senior ace Ryan Christoph (7-3). The usually quick-starting Christoph had some control problems.

“I struggled early. But I found my rhythm after the fourth inning,” said Christoph.

Find his rhythm he did. Christoph did not allow a hit after the fourth inning en route to his complete game victory. His team responded with five runs in its half of the fifth inning, giving the Leopards a 5-2 lead after five.

The team added three runs in the seventh and two more in the eighth, completing the first game of the three-game series with 10-2 victory.

La Verne’s batters more than doubled the Bulldogs in hits, and the ULV defense was error-free, which sharply contrasted with the Bulldogs’ five errors. Christoph finished the game with seven strikeouts.

The morning game at Redlands started just as the previous night, with the Bulldogs jumping out to a quick two-run lead.

Senior pitcher/DH Kyle Spielbuehler lead off the top of the second inning with a first-pitch home run to deep left field.

“I usually like to go after the first pitch. I got a good pitch to hit and hooked it over the left field fence,” said Spielbuehler.

Spielbuehler added another RBI in the seventh on a sacrifice fly. The Leopards were tied at three before the Bulldogs took a one-run lead into the top of the ninth.

ULV responded with four runs in the top of the ninth to give junior pitcher Jon Cruz the lead for the first time. In the bottom of the inning, junior Nathan Devine came in and closed the game, giving Cruz his fourth win of the season.

“Jon pitched one of his best games of the year. He was able to get ahead of the hitters and keep his pitch count down,” said Grudt.

In the final game of the series, the Leopards batters spotted senior pitcher Bo Balzar nine runs. The Leopards seemed to get complacent after their 9-2 third-inning lead.

“We played good in two out of three games and just went flat in the third,” said head coach Bobby Lee.

Redlands scored 10 runs over the last six innings to secure their only victory of the series over the Leopards, 12-10.

The Leopards will wrap up their season this weekend in San Diego, where they will play their final four games at the UCSD tournament.