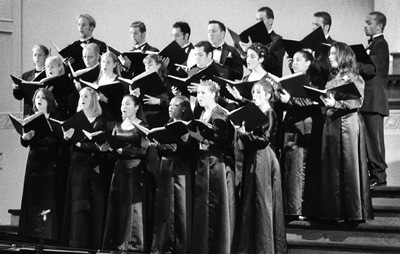 On Friday, the University of La Verne Music Department performed its Spring Concert at the La Verne Church of the Brethren. The concert was entitled “The Flowering of Love.” The groups that performed were the ULV Chorale and the ULV Chamber Singers. / photo by Jaime Ortega

As seasons change and spring come to full force, flowers bloom and celebration is in the air. Many people also associate spring with love.

“The Flowering of Love” was the theme for the University of La Verne’s spring concert on May 12 at the La Verne Church of the Brethren where the Music Department presented its annual event.

The evening began with the ULV recorder ensemble, directed by Anita Hanawalt, playing a prelude of love songs.

After that, both the recorder ensemble and the ULV Chorale performed together, conducted by Assistant Professor of Music Shawn Kirchner and sang four songs, which were “Summer Is A-Coming In,” a 13th century English song, “Come Away, Come Sweet Love” and, “Rest Awhile, You Cruel Cares” by John Dowland and “Fair Phyllis I Saw Sitting All Alone” by John Farmer.

Upon the end of these four songs, the ULV Chamber Singers joined the Chorale in singing two more love songs, which were “Dirait-on” by Morten Lauridsen and “A Red, Red Rose” by James Mulholland. The piano was also played by Timothy Durkovic during these two songs.

Then the large audience was taken away by the astounding performances of Durkovic and pianist Chie Nagatani as their hands flew across the keyboard at an alarming pace and strength.

Nagatani and Durkovic made the audience alert and captive to the sound of their music as they combined their talents as they performed “Gazebo Dances” by John Corigliano. The piece was divided into four parts, which included the Overture, followed by the Waltz, then the Adagio and ending with the Tarantella. Upon the end of this piece, a brief intermission was taken.

“It was like dancing,” said freshman Kirsten Johnson, in regards to Durkovic and Nagatani’s dual performance. “It was perfection with passion and a little bit of flirtation.”

Following her performance, junior Corey Rodriguez and sophomore Chris Arbizu joined forces and sang Paul Simon’s “April Come She Will.” Both Rodriguez and Kirchner played the guitar for that piece.

Then the Women’s Ensemble sang “He’s Gone Away,” a song arranged by Ron Nelson, while freshman Derek Wendt played the piano for that piece.

Following the Women’s Ensemble came the Men’s Ensemble, which feature soloist junior Quinn Harrison who sang “O My Love is Like a Red, Red Rose,” a song arranged by Simon Carrington. Durkovic accompanied him on the piano for that piece.

Finally, both the Chorale and the Chamber Singers got together once again to sing “Te Quiero” by Alberto Favero. This song also featured freshman Wesley Hester and senior Erin Hernandez as soloists. Both groups then sang “Alma Llanera” by Pedro Gutierrez.

The evening finally ended with both groups singing three Scottish folk songs, which included “O Whistle and I’ll Come to Ye,” arranged by Mack Wilberg. Freshman Kim Reed performed as soloist for this song. The other songs included were “My Love’s in Germany” and “I’ll ay Call in Yon Town.”

“I think we did a really good job,” said freshman Alison Fanning, ULV Chorale member, in regards to the evening’s performance.”I think the audience really enjoyed it, we did better than I thought.”