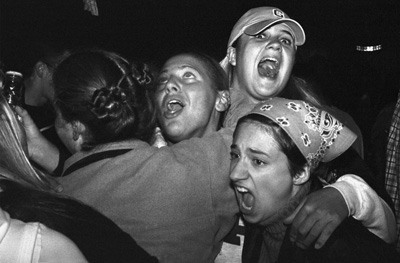 Students filled the University Quad Tuesday to party and let out some stress before finals week. The event featured a live DJ, food and refreshments. Sophomores Cambria Smith, Maria DeSantis, and freshman Jennifer Newman get close together groove to the music and stay warm. / photo by Natalie Fowle

Students from commuters to on-campus residents enjoyed each other’s company at the social held by the Associated Student Federation (ASF) Forum Tuesday night in the University of La Verne Quad, in order to blow off steam before final exams.

In collaboration with ASF, freshmen Liz Lucsko and Danielle Pomierski brought forth the idea in hopes to start a tradition at ULV.

“We wanted to use the funds from ASF to its fullest potential before the year ended,” said Pomierski. “Hopefully this finals social will start a chain of more events for students like this one in the future.”

The idea of having a social with the help of ASF came together along with approvals from housing, maintenance, the police department, food and catering services and the DJ in about a month’s time.

“We went through a lot to have this type of event, considering all the people we had to talk to to make it happen,” said Lucsko.

Both were optimistic on the location of the bash even though the weather was unpredictable, and the time was questionable.

“We weren’t sure where we were going to have the party because we weren’t sure if it was going to rain or if people would show up after their 10 o’clock classes,” said Lucsko.

Within a few hours, the party began to take form. Approximately 100 students and their friends danced to the wide variety of music played by DJ Brady Westbrook from Props Production DJ Services.

“I went to high school with Brady, and he gave us a good deal for the event,” said Lucsko.

Westbrook played everything from rap to Depeche Mode and charged $300 for three hours.

Sophomore ASF members Anna Roy and Kristine Werthwein were also pleased with the idea brought forth by Lucsko and Pomierski.

“Everyone seems to be having a good time,” said Werthwein. “We are really happy about the turnout.”

“When they [Lucsko and Pomierski] told us about their idea, we agreed to fund it because we thought that it would be a cool idea to end the year with a bang,” said Roy.

Students from all around came to have a good time and agreed that the time was well spent with friends before next week’s tests.

Sophomore Cambria Smith enjoyed the idea of the social.

“This party was a great idea,” said Smith. “It was a cool way to say my final farewells toward the school before summer.”

Nick Grosso, 20, a Rancho Cucamonga resident was in attendance, with friends.

“This event put together by the school brought me back to my days in high school,” said Grosso. “Finally someone puts together a function that is a well-organized social event.”

Although he had doubts on holding another social event because of conflicts that occurred at the ASF Bowling event, Frank Tolentino, ASF president, was pleased on the turnout of the social.

“At first, we were pessimistic on the event because of liability reasons, with underage drinking and lack of security,” said Tolentino. “But after we got permission from the city [La Verne], we decided to go ahead and fund the event. We are really happy with the turnout, with a heavy greek population as well as commuter students.”