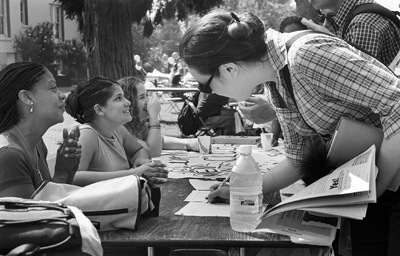 Salsa, anyone? The cross-body lead and the flash are two salsa moves students will be able to learn by joining the Dance Club. At the Club Fair on Tuesday students Monique Flores and Clissa Salas recruit Esther Outten to sign up for at least one of the three types of dance offered by the club. / photo by Kati Kelly

There was a large turnout at the annual Club Fair, which took place Tuesday in the Quad as students checked out the clubs that were present to see what they offered to prospective members.

There were returning clubs present and there were some clubs that are new on campus this year.

Some of the clubs that were present were the Greek organizations, such as Iota Delta, Phi Sigma Sigma, Delta Sigma Theta, Phi Delta Theta, Sigma Kappa and Sigma Alpha Epsilon. Other returning clubs included the business clubs-the ULV Society of Accountants and Alpha Kappa Psi.

Sophomore Jennifer Enriquez was one who attended the fair to check out the business clubs. “I think it’s great to have it, you get to meet other people, and not think about classes. It’s a way to get into the big world.”

Other clubs present were the Latino Student Forum, the African American Student Alliance, the Society of Physical and Life Science Scholars and the International Student Organization. The new clubs included the Asian Pacific American Student Association and the Dance Club.

Campus Ministry had a table that offered flyers explaining the services that were offered to students. One table that was there was an information table that was distributing flyers dealing with activism and social awareness. Junior Chris Arbizu was playing the guitar at this table.

Some of the items displayed on tables for students to see were Greek paraphernalia. Other organizations simply had informational flyers describing their clubs and when their individual meetings would take place.

For instance, Phi Delta Theta will be having a party at the Tiki Room “to expose what our club is all about,” junior Ralph Solis said.

To find out more about these clubs, contact the Student Center Desk or the clubs individually.