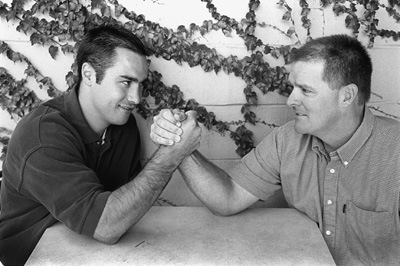 Gabe Duran and Scott Winterburn have made it over the top as the new 2000-01 University of La Verne head basketball and baseball coaches, respectively. / photo by Liz Lucsko

With the late August resignation of University of La Verne baseball coach Bobby Lee and men’s basketball coach Dan Mulville, the University Athletics Department has harbored some new faces in personnel for the 2000-01 Leopards seasons.

ULV Athletics Director Jimmy Paschal said that both coaches were offered assistant positions at state universities. Mulville will be attending to the squad at Cal Poly Pomona whereas Lee accepted a position at Washington State University. Paschal said both coaches were given minimal yet adequate time to work with the University to find replacements for their niche in the department.

Gabe Duran, formerly the assistant coach under Mulville, was hired as the head interim coach for basketball while Scott Winterburn, interim head coach of Azusa Pacific University, was hired to fill Lee’s spot.

As for Paschal, he said he has been pleased with the past and present coaching staffs of both programs.

Paschal said he interviewed Duran for the position soon after hearing of Mulville’s planned departure.

“I think Gabe will do a good job as the basketball coach,” said Paschal. “He’s got good leadership skills.”

Duran himself is a La Verne alumnus (’98) and a two-year veteran to the coaching staff at ULV. While a student at the University, Duran was a team captain for the men’s squad and as the new coach, he said he is excited about his responsibilities.

“Jimmy Paschal called me into his office and asked me, ‘Is this something you’re ready for?,’ and I told him ‘Absolutely,’ ” said Duran.

He also said in addition to the season, a great deal of his focus has been learning the ULV sports information director position, which was formerly held by Mulville.

Paschal is pleased with Duran’s new title because he feels the players will better appreciate a familiar face until a permanent coach is found for the following year.

Paschal said that although they had less time to deal with Lee’s absence, he is content having Winterburn in the program.

“We had a lot of respect for Scott and the Azusa program,” said Paschal of ULV’s rapport with Winterburn.

Before making the switch to La Verne, Winterburn was the assistant baseball coach at APU for eight years and was promoted to the head position last spring. Despite his longstanding history at APU, the head coach is pleased with the move.

“I’ve waited now for the last few years to coach at a school like La Verne,” said Winterburn. “La Verne baseball is long and storied with a lot of tradition. My job is to add to that and to keep things in that tradition.”

The head coach said he wants to avoid unnecessary changes to the program as it is not in his character.

Winterburn said that his operating philosophy surrounds the notion of having a program that provides athletes with a “special opportunity” in a caring environment.

With or without change, Paschal said he has been pleased with the changes thus far.