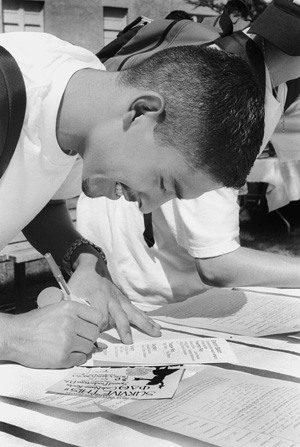 Sophomore Hugo Valencia voted for Secretary Amanda Stutevoss in his first Associated Student Federation (ASF) Forum election on Sept. 19 at the annual Club Fair. Hugo’s reason for voting this year was, “to be more involved and know who’s speaking for me.” / photo by Liz Lucsko

There was a sizeable turnout as students went to vote for the people they want to represent them in the Associated Students Federation (ASF). ASF elections took place on Sept. 19 and Sept. 21 from 10 a.m. to 1 p.m at the Quad.

A total of 145 students voted in the election. “The numbers were real close,” said junior Kristine Werthwein, vice president of advocacy.

“We are very pleased, especially since some of the positions were very close in terms of the outcome,” said ASF president Mario Guerrero.

The people elected for the positions were Assael for freshman representative, Barraza for transfer representative, Stutevoss for secretary, Nix for commissioner and Arbizu for senator.

“So far, it looks like they will be doing a good job this year,” said Michael Houdyshell, coordinator of campus activities and commuter programs, regarding the people chosen for office.

There is another position that is now available, vice president of activities, since junior Alicia Southorn resigned from office. Applications are now available at the Student Center Desk and are due on Oct. 2. Elections will take place on Oct. 4 at the weekly ASF meeting.